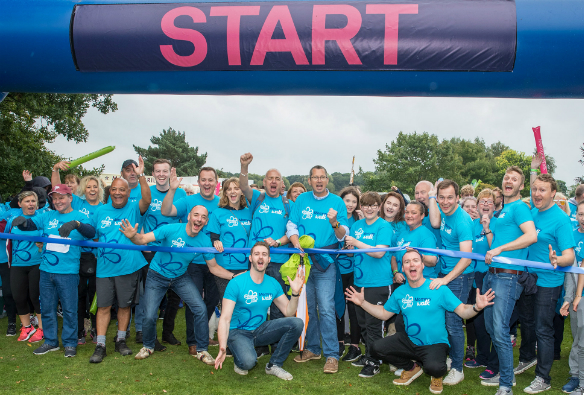 The University of Liverpool's Professor Jerry Turnbull joined 3,000 people this weekend to unite against dementia at a charity walk in the city.

He was accompanied by teenager Jay Stout, whose father was diagnosed with dementia just a year ago, at the start line of this year’s Memory Walk in Croxteth Country Park.

It is one of two major walks in the city raising funds for the fight dementia with the first-ever night time Alzheimer’s Society dockside Memory Walk to follow on Saturday 14 October.

Professor Turnbull and his team at the University's Institute of Integrative Biology are working on research designed to find a drug that could be used early to prevent or slow down the development of Alzheimer’s.

“We are aiming to stop the whole process right at the beginning and to treat the major underlying cause for the first time rather than just the symptoms,” he said.

The team has discovered natural sugars based on the blood thinning drug heparin which can halt or slow the formation of amyloid plaques responsible for Alzheimer’s.

“At present there are no drugs that do this,” said Professor Turnbull. “We hope to be ready to apply to set up clinical trials by 2019 – these would take possibly five years to complete – so there is potential for approval of a new drug within 10 years.”

Funding for the £260,000 research programme came from Alzheimer’s Society. He said: “This funding is vital for the development of new treatments, and it’s fantastic to see the support by so many people at Memory Walk.”

Jay’s mum Tonya said her husband David began behaving out of character some time before being diagnosed with Alzheimer’s two years ago aged 59.

Since then the family had ‘lost everything’ – including their home – as a result of him being unable to continue his work on the process side in the pharmaceutical industry.

“I still look up to my dad, but now he’s someone different,” said Jay “It’s important to take part in the walk to show him I love him. I’m proud to have cut the ribbon for him.”

His dad isn’t able to cope with family life and, having started saying the same thing several times, now needs prompting to do even routine tasks like washing and shaving.

“My dad is disappearing because of Alzheimer’s and more needs to be done to either cure or slow it down,” said Jay. “My dad’s is so rapid it feels like I’ve nearly lost him.”