Introducing the Drugs Venn - the new, simplified way to classify drugs by effect 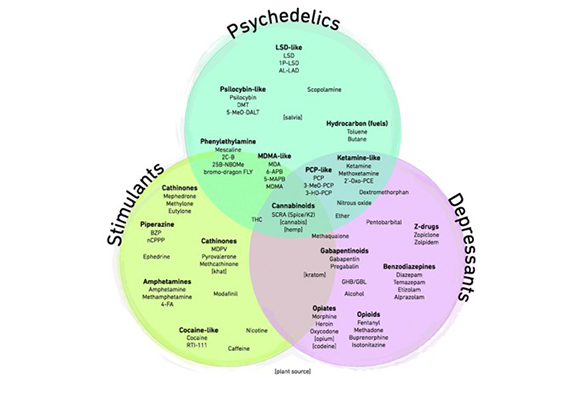 The Drugs Venn, a new model seeking to simplify and improve the classification of drugs by their effects building on the most useful aspects of the existing Drugs Wheel and Drugs Pyramid, was revealed in an academic paper co-authored by the University of Liverpool.

Professor Fiona Measham, University of Liverpool Chair in Criminology and Director of The Loop, worked with Mark Adley, who is currently studying for his PhD at Newcastle University, and Guy Jones, Senior Chemist at the Loop, to assess the benefits and downsides of the established Drugs Wheel and Drugs Pyramid models, before introducing the Drugs Venn, in the paper Jump-starting the conversation about harm reduction: making sense of drug effects, published in the journal Drugs: Education, Prevention and Policy.

Professor Fiona Measham, said: “The drug market exploded in the 2000s with one or two new drugs being identified every week but what do all these hundreds of New Psychoactive Substances actually do?

“Given that there is no perfect way of classifying drugs, the challenge for academics and practitioners is to create and communicate classifications with practical utility in the real world.

“The three models discussed in this paper – the Drugs Wheel, Pyramid and Venn – provide an opportunity to jump start these risk communications and with The Loop, I have seen how constructive they can be.” 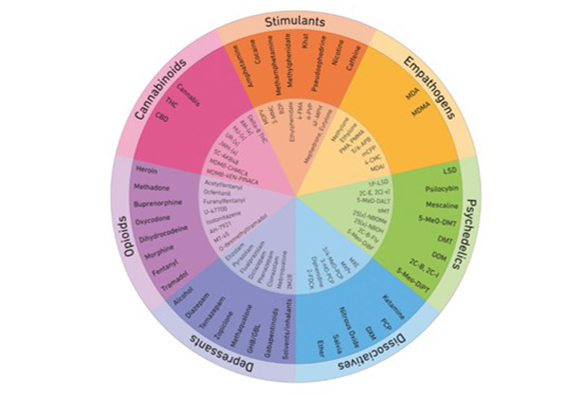 Guy Jones said: “There are literally hundreds of different types of drugs being sold on the market, and while their differences in chemical structure change their effects, there can be considerable nuances between them.

“Trying to find a classification system that succinctly and meaningfully separates the drugs without causing confusing overlaps between categories becomes a big task”. 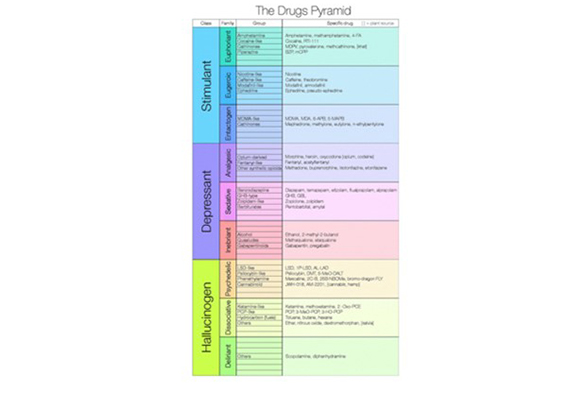 The Drugs Venn seeks to simplify the model by: integrating less technical terms from the revised Drugs Pyramid; removing the anti-psychotic category; and – in response to feedback from academics and practitioners in the field – renaming hallucinogens as psychedelics.

This new model features synthesized elements of its forebears, including miniature Drugs Wheels and the three main categories of the Pyramid model, and, by drawing on the McCandless Venn, introduces the overlapping areas found on neither the Wheel or Pyramid.

Report lead author, Mark Adley said: “Drug effects are a messy business, and a taxonomy such as the Drugs Wheel aims to provide some clarity.

“However, no model is perfect, and by presenting different models within this paper we hope to illustrate how it is the very differences between models of drugs classification that can lead to some illuminating discussions about drug effects”.

You can watch Mark Adley and Guy Jones discussing the new approach here.

The paper Jump-starting the conversation about harm reduction: making sense of drug effects by Mark Adley, Professor Fiona Measham and Guy Jones, is published in the journal Drugs: Education, Prevention and Policy. https://doi.org/10.1080/09687637.2021.2013774