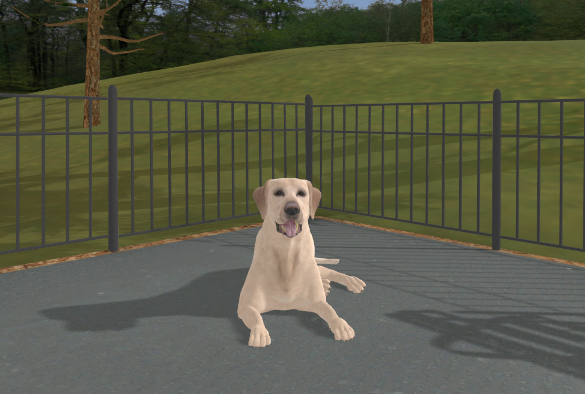 A virtual reality dog could one day be used as an educational tool to help prevent dog bites, thanks to an innovative project led by researchers at the University of Liverpool.

As part of a new pilot study, veterinary researchers have tested a virtual reality Labrador known as DAVE (Dog Assisted Virtual Environment) to explore if and/or how humans recognise and interpret signs of dog aggression.

Dog bites are a growing public health concern, with previous University of Liverpool research finding that adult hospital admission rates for dog bites tripled in England between 1998-2018. A better understanding of human-dog behavioural interactions could help researchers tackle this growing problem but research using real dogs is fraught with challenges, which is where DAVE comes in.

Dr Carri Westgarth, a Senior Lecturer in Human-Animal Interaction at the University of Liverpool explains: “Dog bites are a common public health issue affecting human-dog relationships. Studying human behaviour around a dog performing aggressive behaviours is ethically difficult, for the sake of the risk to the person but also, we don’t want to be deliberately making dogs unhappy. A virtual dog solves these problems.”

The researchers recruited sixteen adults for a practical pilot study to explore a virtual indoor living room with the virtual reality dog model allocated in the opposite corner of the room. The dog model was based on the popular family-favourite Labrador breed.

The team asked participants if they recognised and understood the signs of aggressive behaviours displayed by the virtual dog, including licking its lips, yawning, front paw lifting, backing away, barking, growling, and showing of teeth. These behaviours are referenced from the ‘Canine Ladder of Aggression’ which shows how a dog may behave when it is uncomfortable and does not want to be approached.

The researchers also assessed participant proximity to the dog using VR head and hand tracking. Participants behaved and interacted with the model in a manner that might be expected with a live dog. However, three participants got close enough to the aggressive virtual dog to get bitten. The study found little evidence of simulator sickness and indicated that the participants perceived the dog as realistic.

PhD student James Oxley said: "This is a novel pilot study which overcomes the challenges associated with assessing human behaviour around real dogs displaying aggressive behaviour. Our findings highlight the potential that the virtual reality model has to help us better understand human behaviour in the presence of dogs and our interpretation of dog behaviour."

The researchers also suggest that the virtual reality dog could be developed for use in other areas of behavioural research, such as educational dog safety lessons and in the treatment of dog phobias.

The model was developed in collaboration with the University’s Virtual Engineering Centre (VEC) and supported and funded by Dogs Trust.

Paula Boyden, Dogs Trust Veterinary Director, said: “We were delighted to fund the University of Liverpool DAVE Pilot, its potential to provide a fascinating insight into human-canine interactions is clear. We hope that DAVE will be developed into an education tool to teach people how to be safe around dogs. Before a bite occurs, a dog will often display subtle behaviours to indicate that it is uncomfortable and does not want to be approached. By educating people about these behaviours, we hope that incidences of dog bites can be significantly reduced.”

The study is published in the journal PLOS ONE.