Dr Oznur Apsimon studied Physics Engineering in Hacettepe University (Turkey) followed by an MSc in accelerator physics, specifically, on the design of an infra-red free electron laser in Ankara University, Institute of Accelerator Technologies in collaboration with The Helmholtz-Zentrum Dresden-Rossendorf. In parallel of these studies, she also took part in tests and conditioning of radio-frequency accelerating structures (30 GHz) for the Compact Linear Collider (CLIC) project at CERN. She gained her MSc degree after these initial engagements with the field of accelerator physics and technology. Then, she continued her activities at CERN as a member of the CLIC project, on numerical and experimental characterisation of a novel photoinjector as the drive beam injector. During this three and a half years long research and development project she was also a CERN doctoral student associated with École polytechnique fédérale de Lausanne, obtaining her degree in 2011. Her engagement with CERN continued as a research fellow (2011-2013) on the halo cleaning using a novel method using a local orbit bump based, fixed graphite target for CERN's Super Proton Synchrotron (SPS) as a part of LHC quench protection system.

In September 2013, Dr Apsimon joined the Cockcroft Institute of Accelerator Science and Technology to work on CERN's unique, proton driven plasma wakefield accelerator project AWAKE. Within the frame of the institute, she was a postdoctoral research associate in the University of Manchester and Lancaster University between 2013-2020 working on a range of topics including external electron injection and emittance diagnostics for AWAKE - a task which was lead by her from 2017 -, exploitation of local facility CLARA for electron driven plasma wakefield acceleration and beam physics aspects of terahertz acceleration. During this time, she specialised on beam physics under RF fields especially for space charge dominated electron beams - and emittance diagnostics in this regime -, beam physics for novel, plasma and THz based accelerators as well as their interfacing with conventional accelerators.

She joined the QUASAR Group, in the University of Liverpool, in September 2020 as a research coordinator initially involved in a range of projects regarding AWAKE, betatron radiation generation from under-dense plasma, non-linear optical couplings and their corrections in HL-LHC, dielectric laser acceleration and acceleration in carbon nanotubes. 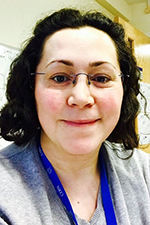