He then went to continue his studies at Universidade Técnica de Lisboa and enrolled in a Physics Master’s degree. After finalizing his Master’s degree, and as a follow-up of his Master’s thesis, Miguel worked as a research fellow at LIP - Laboratório de Instrumentação e física experimental de Partículas, in Lisbon, under the CMS project which is one of the two general purposes from the LHC experiments at CERN. There, he participated in a physics analysis for the search of beyond standard model supersymmetric stop particle.

Miguel joined the QUASAR Group in April 2013, at the same time he started his PhD studies at the University of Liverpool under the auspices of Marie Curie fellowship. His research project is being conducted at CERN in the area of beam instrumentation. There he is studying the application of Superconductor magnetic shields and Superconducting QUantum Interference Devices (SQUIDs) to develop a high sensitivity beam current monitor, for the low-energy antiproton rings AD and ELENA. His work includes designing, implementing and measuring the performance of such system. 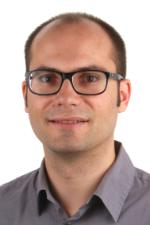