After three years of French preparatory classes in mathematics and physics at Lycée Louis le Grand (Paris), Lina Hoummi graduated as an Engineer Specialised in Optics, from the l’Institut d’Optique Graduate School, in September 2016, and obtained a Master’s degree from the University Paris-Saclay, entitled Laser, Optic, Matter.

Her Master’s thesis is the result of more than two years of apprenticeship among the III-V Lab, a joint laboratory between Thales and the former Alcatel-Lucent Bell Laboratories France – now Nokia. Under the supervision of Guang-Hua DUAN, she studied hybrid III-V lasers on silicon for telecommunication networks, and specifically characterised and optimised silicon directional couplers’ robustness.

Lina joined the QUASAR Group in October 2016, as a PhD student. Her project is shared between the University of Liverpool, based in the Cockcroft Institute, Daresbury, and the synchrotron SOLEIL in France. Working among the SOLEIL accelerator group, she compares and studies different lattice schemes for the upgrade of SOLEIL storage ring. This project is part of the worldwide effort to create a new generation of synchrotron’s DLSRs (Diffraction Limited Storage Rings) by reducing their critical parameter, the emittance, by at least an order of magnitude. 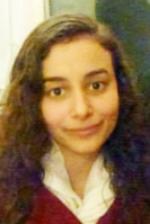