Jose Luis studied a bachelor in “Telecommunications Engineering” at the University Miguel Hernandez (Elche, Spain) and finished his bachelor thesis titled “Non-Invasive Brain-machine interface for the disabled” in 2010. Then, he pursued his research career by studying a “Master in electronics, communications and computer engineering” at the same university.

In 2011, he joined CERN’s BE-BI-BL group as a technical student where he developed his master’s thesis. His work defined the baseline design of the position sensors for the new generation of beam wire scanners for the LHC Injectors Upgrade (LIU-BWS).

Later, in 2012 he inscribed in the “PhD. Programme on Engineering and Applied Sciences” at the University of Barcelona and obtained a doctoral student position in BE-BI-BL.  In his thesis work “Beam Secondary Shower Acquisition design for the CERN high accuracy wire scanner”, Jose was responsible for the research of new detection and acquisition systems for the secondary particle shower of the LIU-BWS. During his work, he evaluated different types of detectors and an innovative readout architecture based on in-tunnel digitalization and digital signal transmission to surface electronics.

From 2016 to 2019, Jose took part in the CERN’s BE-BI-PM group as a fellow, working in the commissioning of high dynamic range secondary shower detector system for beam wire scanners. He was responsible for the detectors design, the development of associated low noise signal conditioning electronics and high-speed acquisition systems. Moreover, he was also in charge of the LIU-BWS performance assessment under operational conditions and their calibration.

In January 2019 Jose started his collaboration with the Quasar Group as a “Cooperation Associate” based at CERN while continuing with his activities in Beam Instrumentation for the Beam Wire scanners Upgrade.

In February 2019, Jose successfully defended his PhD thesis at the University of Barcelona. 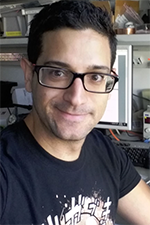