Egidijus Kukstas graduated with a MSci degree in Physics with Astrophysics from the University of Glasgow in 2016. Whilst at Glasgow, Egidijus gained research experience through a number of summer projects. With staff in the Solar Research group, he carried out projects observing coronal dimming events on the Sun using the SDO/EVE instrument, as well as simulating the radio emission from hot chromospheric solar flare sources.

In the latter years of the programme, his interests migrated towards the field of cosmolgy. His masters project assessed the feasibility of an alternative model of the Universe as a way of explaining Dark Energy. It involved subjecting the non-standard 'Timescape' model to internal consistency checks as well as parameter estimation tests.

During his fourth year of study, Egidijus carried out a 12-week summer research project at the University of Heidelberg in Germany. This project involved post-processing of megneto-hydrodynamical simulation outputs of star-forming dust clouds in the central regions of galaxies. Egidijus produced synthetic infra-red images which were then compared against real observations from the Herschel Space Observatory.

In 2020, Egidijus was awarded his PhD from Liverpool John Moores University. His thesis focussed on galaxy evolution in dense environments; specifically, how environmental processes can 'quench' star formation in satellite galaxies. He adapted the method of 'cross-correlations' to be used to quantify the level of influence that environment exerts on galaxy star-formation activity. Egidijus computed two-point statistics encapsulating the cross-correlation in real observations and compared them against equivalent synthetic observations from cosmological hydrodynamical simulations. The use of this technique allows for galaxy environment to be studied without the need to find individual galaxy groups or clusters.

He joined the QUASAR Group as a LIV.DAT fellow in data intensive science in September of 2020. His main role is to carry out R&D in data analysis, machine learning, and AI connected to accelerator science done in the group. He works closely with students in the LIV.DAT programme and in the wider group. 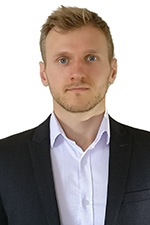