Dr. Eduardo Nebot studied physics at the Universities of Zaragoza (Spain), focussing on the discipline of particle physics. In September of 2005, he started his PhD thesis on electromagnetic calorimetry within the ATLAS detector at University of Madrid (Spain). Eduardo developed a reconstruction method which allowed to recover the energy of the particles (electron or photon) coming from the interaction point. The so-called Calibration Hits Method proved to bring the energy scale and resolution within the design requirements and it decomposed the energy depositions in three contributions: Energy depositions in upstream (dead) material, energy deposited in the calorimeter or energy leaked behind it. The Calibration Hits Method is currently the default algorithm to recover the energy of electromagnetic object in ATLAS.

From July 2010 until April 2013, Eduardo joined the Beam Loss section within the Beam Instrumentation group at CERN as a member of the Beam Loss Monitoring system team for the LHC. His main task was related to the calculation, handling and verification of abort thresholds and large scale data analysis. Moreover, Eduardo actively participated on the setup, data taking and data analysis of several experiments performed in various beam lines to study the response of several types of ionisation chambers.

Currently, Eduardo is a research associate member at the University of Liverpool where he is continuing with Beam Loss Monitoring studies activities for the future accelerator CLIC. His studies focus on the detection of beam losses with electro optical systems, in particular, the use of optical fibers as radiation detectors. Charged particles crossing an optical fibre will produce Cherenkov light which will partially propagate to the end of the fibre. The light pulse generated by means of beam losses is transformed into an electrical signals via photo-detection and amplification chain. Dr. Nebot is involved in the characterization of Silicon PhotoMultipliers (SiPM) as a potential suitor for high sensitivity and fast time response photon sensors.

Moreover, a system based on Cherenkov light produced in optical fibers presents several advantages with respect to standard beam loss monitoring techniques. Optical fibers are insensitive to electromagnetic noise, magnetic fields and Cherenkov light is only produced in response to charged particles. Sensors insensitive to neutral radiation are particularly interesting for Damping Rings (DR), i.e., storage rings in which synchrotron light produced by the circulating electrons is used to reduce the transverse beam sizes. Eduardo is collaborating with the Australian Synchrotron Light Source (ASLS) to design a BLM system based on optical fibers for the CLIC DR. 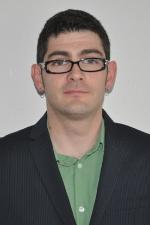