Dr Chris Edmonds joined the Cockcroft Institute in 2010, when he began his PhD study on comparing the performance of synchrotron and Fixed Field Alternating Gradient (FFAG) accelerator designs for use in proton therapy. As part of the project, Chris worked extensively on characterising the proof of principle non-scaling FFAG accelerator, EMMA. A comprehensive understanding of this machine allowed for accurate models of EMMA to be produced, and for the tools used when modelling FFAG to be refined. Chris used these tools to design and optimise the models of synchrotron and FFAG proton accelerators (which featured resonant extraction strategies) that formed the basis of comparative element of the project.

After completing his PhD, Chris remained with the University of Liverpool, and his focus became the development of transverse emittance measurement techniques for the VELA accelerator. Ultrashort bunch lengths and a space charge dominated beam meant that a detailed understanding of the beam dynamics was crucial for accurately measuring the emittance within VELA.

Throughout his time at the Cockcroft Institute, Chris has maintained a strong interest in science education and public engagement; Chris played a leading role in the development of augmented reality, virtual reality and immersive film experiences, and has worked with placement, undergraduate and PhD students to produce interactive content that aims to communicate the science of particle accelerators. In April 2017, Chris joined the QUASAR Group as he started his new role, for which he will be investigating teaching innovation within the Department of Physics. 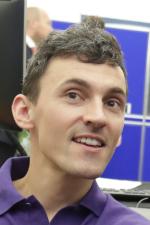