Carmelo Scarcella studied Electronic Engineering at Politecnico di Milano. He has obtained the Bachelor’s degrees and the Master’s degrees in Electronic Engineering in March 2008 and December 2010 respectively. His Master’s final project was titled “Ultra-fast electronics for a single-photon detection module based on InGaAs/InP SPADs”. In 2011 he joined the PhD program of the Information Technology Department at Politecnico di Milano where he carried out research activity on Single-Photon Avalanche Diodes (SPADs) and successfully defended his PhD Thesis titled “Near-infrared photon counting instrumentation and applications” in March 2014.

In September 2016 Carmelo joined the EP-ESE-BE Group at CERN, where he has been involved in the development of next generation of single-mode rad-hard optical links for particle accelerators, in collaboration with the Beam Instrumentation Group. He carried out a feasibility study of a wavelength division multiplexing (WDM) scheme based on the existing Versatile Link framework. He has also been involved in the radiation tolerance study of Silicon Photonics for future high speed links with even higher radiation resistance.

Carmelo started his collaboration with the Quasar Group as a research associate based at CERN in September 2019, while continuing with his work on Silicon Photonics for high speed links. 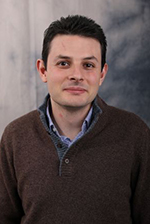