Bruno Galante studied Physics at the University of Parma. He graduated in October 2014 with Bachelor’s Degree in Physics, and then he continued his studies until October 2016 when he graduated with Master’s Degree and with a specialisation in Physics of Matter and Physics of functional materials. During his thesis, he worked on an experimental project called “Carbon nanostructures for symmetric Supercapacitors”.

Bruno joined then the AVA project in October 2017 as a Marie Curie fellow at CERN and he is part of a project involving the generation of cold electrons for the cooling of an antiproton beam due to reduce or eliminate the emittance blow-up caused by the deceleration process.
Bruno also joined the QUASAR Group in December 2017 and at the same time he started his PhD studies at the University of Liverpool.

Generation of cold electrons for an eV electron cooler 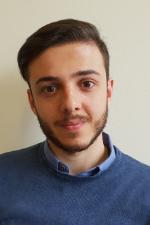