It is widely accepted that proton therapy is more effective in sparing normal tissue than conventional photon therapy. This is due to a maximal energy deposition at the end of a proton track known as the Bragg Peak. The concentrated energy is targeted directly at the tumour volume, with the aim of damaging the cancer cell’s DNA, eradicating the tumour. The damage that protons induce is also suggested to be of a more complex nature, ensuring that the cell finds it difficult to repair any lesions or base damage, causing a higher probability of cell death. The comet assay is a method to determine the level and type of damage caused within the cell DNA. 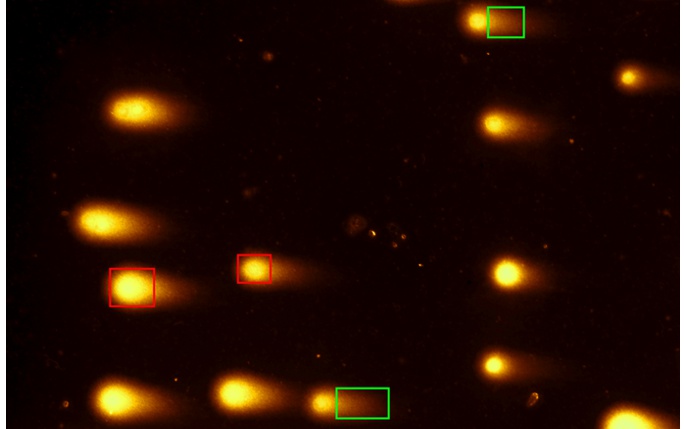 The comet assay works on the method of immobilising cells following irradiation and breaking down their cellular and nuclear membrane, freeing the DNA. The cells are then subjected to an electric field in order to elongate the DNA (forming a comet-like tail) and expose any strand breaks that may be present. In this elongated state, cells can be imaged in order to determine the extent of DNA damage that has occurred. A program is under development to automatically analyse comet assay images in order to quantify the degree of damage cells have undergone. This works by manipulating the shape and size of comet tails. The amount of DNA present in the comet tail is an indicator of the level of damage; a high proportion of DNA in the tail is indicative of high damage and vice versa.
This work is in collaboration with the North West Cancer Centre who have supplied the comet assay images and also the Clatterbridge Cancer Centre, where proton irradiation is carried out. The long term aim for this research is to determine the energy deposition within cells from proton irradiation at varying energies. This will then be used in a model to predict the type and level of damage, and in turn the type of comet assay image that would be expected.