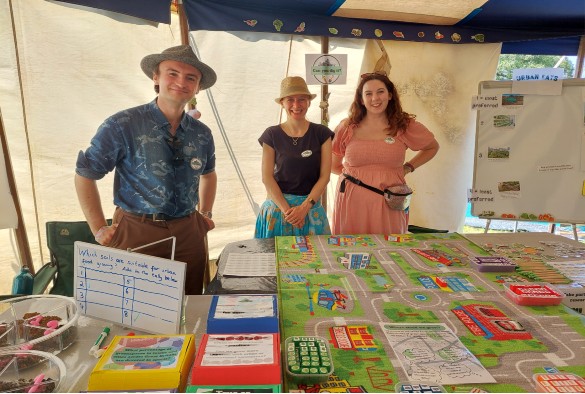 The University of Liverpool's Dr Charlotte Hardman and Dr Bethan Mead alongside Cranfield University colleague Dr Dan Evans had the once-in-a-lifetime opportunity to attend Glastonbury Festival to showcase their research on urban food growing in the brand-new Science Futures area.

Our Can You Dig it? stall showcased the findings of our UKRI-funded research, Rurban Revolution, which focuses on the transformative potential of urban food growing for people and planet. One of our research outputs showed that, if we used all the green spaces in towns and cities for food growing, we could grow 8 times as much fruits and vegetables as are currently grown in Great Britain (enough for all residents to achieve their 5-a-day).

Inspired by this, our stall featured a future town where urban spaces are food growing places. Festival goers were invited to place wooden blocks representing different fruits and veggies onto the town to create their own vision for urban food growing, considering things like the best spots for growing and areas to avoid. There were some great ideas from growing on rooftops to underground car parks, and even a suggestion that maybe one day we could grow on the moon!

We also displayed a selection of urban soils, taken from a range of locations within one UK city, and festival goers were invited to vote for which soils they thought would be best for food growing. And via ‘Ecosystem Services Top Trumps’, participants were challenged to play the classic card game with a unique spin to learn about the various services (e.g. increased pollination, biodiversity, wellbeing and social benefits) that food growing in different urban spaces can deliver (based on our recent systematic review).

We couldn’t resist the opportunity to collect some research data and in our live study participants learned about different methods for growing food in urban areas, from more traditional growing in gardens though to high-tech hydroponics and aquaponics. Using magnets and a whiteboard we captured opinions about foods grown via these different methods, for example would you eat a lettuce which has been grown vertically without soil? The data will contribute to our ongoing research on consumer perceptions of urban-grown food (funded by UKRI’s strategic research priority Transforming UK Food Systems).

Highlights over the five days included speaking to hundreds of people about our research, whose ages ranged from one month to 81! We all learned new things and the quality of conversations with members of the public was on a par and often exceeded those at academic conferences, giving us lots to think about. We appeared on the Laboratory Stage for a Q&A session on sustainable food, recorded a video for the official GlastoScience twitter account, and were even interviewed by a Radio 1 DJ. And after work, the whole of Glastonbury Festival beckoned - Paul McCartney’s Saturday night set was particularly memorable.

Public engagement is so important and one of our favourite parts of the academic role. After a rest (and several showers!), team Can You Dig It will be back.