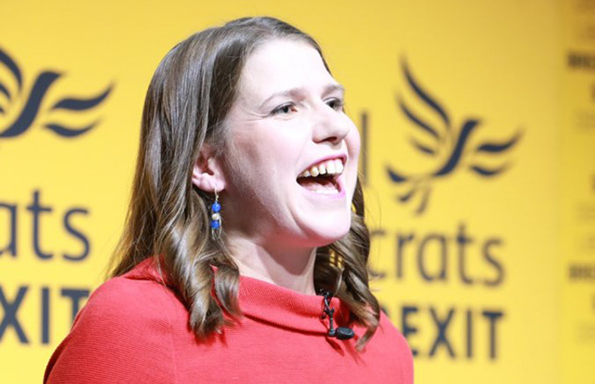 Jo Swinson was elected as the new leader of the Liberal Democrats by a significant majority of party members. She defeated her opponent, Ed Davey, by gaining nearly 48,000 votes (a victory of just under 20,000) in a contest with a curiously low turnout (only 72% of the estimated membership actually voted, which suggests either some inaccuracy in the membership figures or an uncharacteristic reluctance of Liberal Democrat members to actually campaign and vote in an electoral contest.)

At the age of 39 and as the party’s first female leader she is being portrayed as the epitome of change politics in the UK. Swinson leads the national party most unequivocally hostile to the entire Brexit process and inherits a party rejuvenated in the last twelve months by strong showings in the Local and European Parliament elections.

The announcement of Swinson as leader of the Liberal Democrats hardly registered on the UK politics Richter Scale. Today the news will be consigned to the waste bin as the nation discovers the outcome of the similar election of a new Conservative leader (and therefore Prime Minister). And therein lies the perpetual problem for the Liberal Democrats, they are the extra wheel – the outsider party continually fighting for media attention and always, always, always the party that is defined in terms of its relationship to the two mainstream parties.

The difficulty for the new Liberal Democrat leader remains the same as that of her predecessors. The party needs to demonstrate that they have a continued relevance in 21st century Britain. The damage done by the 2010-15 coalition has not been fully repaired; many Labour loyalists who voted tactically for Liberal Democrat candidates to unseat Tory MPs cannot forgive the party for then entering a coalition with the Conservatives; the search for an identifiable policy led to Liberal Democrats to alight on opposition to student tuition fees in a policy that was one of the first causalities of the coalition era. The party’s fortunes fell dramatically and disastrously.

By 2015 they were eclipsed by UKIP in terms of the popular vote and the SNP in terms of getting MPs elected. The party were no longer the third party in British politics but the 4th or 5th depending on how you counted. New LibDem leader, Tim Farron, was not even invited to the TV debates during the Brexit referendum campaign of 2016 meaning the most consistently pro-EU party in post-war politics found it hard to get a hearing in the generation-defining vote. Farron left the leadership after another poor show in the 2017 general election – failing to oversee a revival in party fortunes and nearly losing his seat in the process. He was replaced by Vince Cable who steadied the ship but made little headway until the 2019 elections.

With the success of 2019 local and Euro-elections, the eventual eclipsing of the Independent Group (Chukka Umuna is now officially a Liberal Democrat and Heidi Allen, Sarah Wollaston and Luciana Berger all tweeted their support and encouragement for Swinson yesterday), the new Liberal Democrat leader will hope that Brexit and the continued chaos of mainstream British politics offers her party a road back to redemption.

Any road back for the Liberal Democrats is long and winding however. European Parliament election success came with the backdrop of lacklustre Tory and Labour campaigns and a voting system that rewarded parties with broad rather than concentrated geographic support (so the big winners were the new Brexit Party, the Liberal Democrats and to some extent the Greens). To do well at a general election the Liberal Democrats must challenge the existing party framework. In truth too few of us live in seats where the Liberal Democrats can be seen as realistic challenges to an incumbent Labour or Conservative MP.

The wasted vote syndrome is likely to be the biggest drag on Liberal Democrat support at any future general election. The other hope for Swinson’s Liberal Democrats is that voters will conclude that Brexit has broken the mould of mainstream politics and are now willing to vote for different parties as a result. The lurch to the Eurosceptic right of the Tories under Boris Johnson, and the continued fractious and controversial battles between Labour’s leadership, membership and parliamentary base might combine to fuel Liberal fantasies of revival.

The truth is however, that these hopes continue to rest on the fortunes of the other parties as much as they do the Liberal Democrats. Swinson inherits a newly confident and assured party but the structural weakness at the root of the Liberal Democrat position remains its key flaw.

This article was written with Professor David Cutts at the University of Birmingham. Andrew and David are co-writing a book on the Liberal Democrats provisionally entitled From Despair to Where? (Manchester University Press)