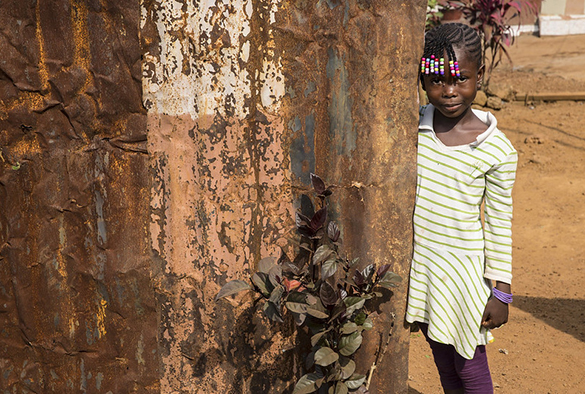 The report—Child Trafficking and the Worst Forms of Child Labor in Sierra Leone—represents the largest-scale household survey on the topic ever undertaken in Sierra Leone. Produced by an international consortium of anti-slavery researchers, the report includes context-specific recommendations for programs and policies that can improve how government agencies and communities can address child trafficking and child labor injustices in the West African country.

“Our research on child trafficking in Sierra Leone has given us insights into service and policy gaps,” said Helen Bryant, a Liverpool-based policy officer with the African Programming & Research Initiative to End Slavery (APRIES) at the University of Georgia’s Center on Human Trafficking Research & Outreach (CenHTRO). Bryant and University of Liverpool Professor of Politics Alex Balch contributed policy recommendations informed by the research findings.

Bryant added, “Our recommendations reflect observations on these gaps and offer ways in which prevention and protection services can be supported to reduce prevalence of child trafficking and exploitation.”

The report specifically describes child trafficking and child labor in three hotspot districts in the Eastern Province—Kono, Kenema, and Kailahun—that are among the poorest areas in what is considered one of the world’s poorest countries. The nature of trafficking in Sierra Leone results in Eastern Province children being taken outside the region, often to more urban areas. The report’s insights and recommendations have the potential to improve children’s lives across the country.

“Without reliable estimates of child trafficking and child labor prevalence, government and NGOs cannot have a baseline to work from, making it impossible to know if we are making progress in reducing the problem,” said CenHTRO Director David Okech, principal investigator for the report. “The high number of children in trafficking and labor is quite significant and our goal is to partner in prevention, prosecution, and protection efforts to reduce the problem over time.”

To begin to address trafficking in the country, the Government of Sierra Leone passed anti-trafficking legislation in 2005. It also launched the Free Quality School Education Program to improve access to school and created the Hands Off Our Girls Campaign to raise awareness about gender-based violence. But the report recommends much more be done in response to child trafficking and child labor in the country.

The report’s recommendations include greater safeguards for children in informal fostering arrangements; increased access to educational opportunities, especially for children living without one or both parents; and, overall, increased collaboration and cooperation throughout Sierra Leone society— between government agencies, families, community leaders, and all non-government stakeholders—to prevent trafficking and support survivors.

Between 2019 and 2020, researchers conducted over 3000 household surveys, interviewed survivors, parents, and key stakeholders, and organized 23 focus groups. Conflict Management and Development Associates, a Sierra Leone-based research agency, and the ResilientAfrica Network, a research organization at Makerere University in Uganda, collected the data under the immense pressures presented by the Covid-19 pandemic. The US Department of State Program to End Modern Slavery funded the research.

Among other findings, the report summarizes community perspectives on child trafficking and child labor. It also identifies the populations most vulnerable to trafficking: 12-to-17-year old children, children who have lost one or both parents, and children not enrolled in school.

Sierra Leone and the Eastern Province

Kenema, Kailahun, and Kono districts form the Eastern Province of Sierra Leone. Of a population over 1.6 million persons, about 54% are under 19 years old. Agriculture—specifically subsistence rice farming— is the most prominent occupation in the province, with cocoa and coffee production notable in Kailahun. Diamond mining, a practice known to have fueled civil conflict in the country, occurs in all three districts. APRIES selected the Eastern Province under the advice of its partners in the Government of Sierra Leone and in-country NGOs.

Over the past 30 years, Sierra Leone experienced a series of man-made and natural disasters that have left the country’s children vulnerable to trafficking. A civil war from 1991 to 2002 and the Ebola epidemic increased poverty and malnutrition in the country. These traumatic events exacerbated the number of orphaned or abandoned children in Sierra Leone. Data in the report suggests that children who have lost one or both parents have a higher rate of victimization. The ongoing Covid-19 pandemic has also made life more difficult for Sierra Leone’s children, increasing their vulnerability to trafficking and impacting effective responses to the problem.

One unique aspect of the challenges faced by children in Sierra Leone is the dependency of families on informal fostering arrangements known as menpikin, in which children reside in households separate from their biological parents. The practice predates the civil war, is common in many Sub-Saharan African countries, and is considered a way for parents to improve their children’s lives.

“We were poor, and my mother could not cater for my needs, so she saw an opportunity in my trafficker’s request to take me away. [The trafficker] promised [my mother] of giving me a better education,” one survivor said in an interview.

Following this report, APRIES and CenHTRO have planned an endline study, beginning in 2022, that will assess changes in the prevalence of child trafficking and measure the impact of current anti-trafficking initiatives. Additional research projects that extend or expand upon the report are in development or ongoing.

APRIES also works with implementation partners, like World Hope International, to apply the report’s findings to improve anti-trafficking efforts in Sierra Leone. For example, to address the high prevalence of trafficking for out-of-school children found in the report, APRIES’ partners are developing new strategies for community sensitization and engagement of youth, caregivers, and community groups.

[callout title=More]Slavery project boosted by $15.75m from US State Department[/callout]