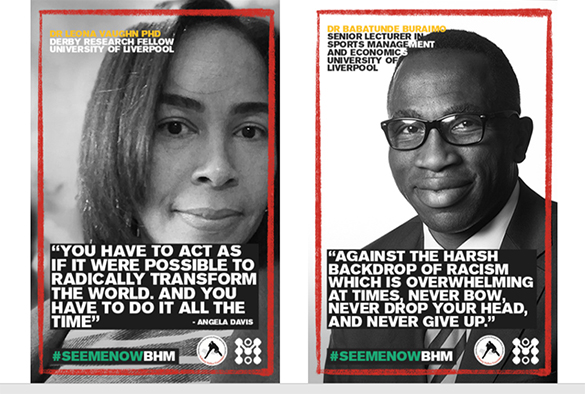 Images of two University of Liverpool academics are being featured on digital screens in Liverpool city centre, as part of an Anthony Walker Foundation (AWF) campaign to mark Black History Month.

Both were asked to provide a piece of advice that they would give to their younger self, or an inspirational quote, to accompany their image.

Ben Osu, AWF Strategy Lead, said: “The whole point of the campaign is to highlight some of the amazing work and achievements of some of our local black people, to inspire the next generation.

“We need to promote positive role models in all industries so that young black people growing up can see people who look like them in the industries and jobs they want to go into – such as accountants, entrepreneurs and politicians.”

The images will be featured on Open Media digital screens throughout the city centre.

Mason Holgate said: “I was brought up to believe that anything was possible if you were prepared to work hard and make sacrifices and I am encouraged by the global movement to effect change for the better.

“You deserve the same opportunities as anybody, your accomplishments – passing exams, gaining a new qualification, whatever they are – should be recognised and rewarded. Always treat people with grace and respect but never allow anybody to tell you that you cannot achieve your goals in life.

“Have the courage to be yourself and pursue your dreams with all your heart. Celebrate your heritage and be proud of who you are.”

Dr Buraimo is a sports economist who has conducted research on behalf of the Department for Culture, Media and Sport (DCMS), Sport England, the National Trust and local authorities.

Dr Leona Vaughn is an experienced professional and academic researcher in fields of equalities and social justice.

The Anthony Walker Foundation was established after the racially motivated murder of Anthony Walker in Huyton, 2005. Since then, the organisation has worked to promote racial justice, diversity and inclusion and runs a support service for those who have experienced hate crimes across the region.