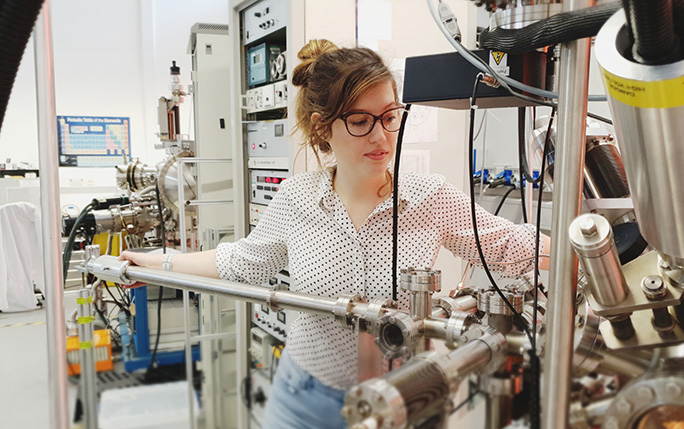 I am currently doing my PhD in condensed matter physics at The University of Liverpool. However, this was not always the plan. Before deciding to be a physicist I wanted to be a nurse, an archaeologist, an architect and finally a chemist. To make up my mind I went for work experience with an architect company and in a chemistry laboratory and realised that neither of them were for me! I then saw an advertisement for work experience in a nuclear power plant which I thought would be interesting. I applied and I have never looked back. I had always enjoyed maths and physics even from a young age, I just hadn’t considered that I could do it for a living. All of this was decided a couple of months before applying to University so it’s never too late to find what you love and pursue it!

When I started University, I was adamant that I wanted to be a nuclear physicist and work at the power plant that I had been for work experience. However, the broad range of subjects that I learnt about really opened my eyes to the scope of physics careers that I could have that I wasn’t aware of before. The two areas that I loved learning about was condensed matter physics and medical physics. Therefore, in my final year, my chosen subjects were mostly in those fields and I really enjoyed my time. I then received my BSc in Physics with Medical Applications which turned out to be the highest mark in the year which I received an award for! That was a nice surprise and I felt all that hard work was worth it.

It’s never too late to find what you love and pursue it?

After my BSc, I was at a point again where I needed to decide what I wanted to do again. I applied for a project where I used x-ray photoemission spectroscopy which is a technique that I really enjoyed and have met many amazing people in the community. In the end, it turned out that the project was not for me and so I decided to find another path to go down. Luckily, I found a PhD project that had XPS as its main technique looking at 2D materials and that’s where I am today. I frequently visit different facilities across the country to measure different materials such as battery materials, transparent conducting oxides, wide band gap semiconductors and more. The best thing about being able to travel across the country doing measurements is that I get to meet other women in my field that I really look up to and aspire to be like further down the path in my career!

At the moment, I aspire to carry on working in the photoemission field and maybe get a job as a beamline scientist. However, knowing my track record that could change again! I hope to inspire a new generation of condensed matter physicist, and to encourage girls and women to pursue a career in science- that’s one thing I know I won’t change my mind on!