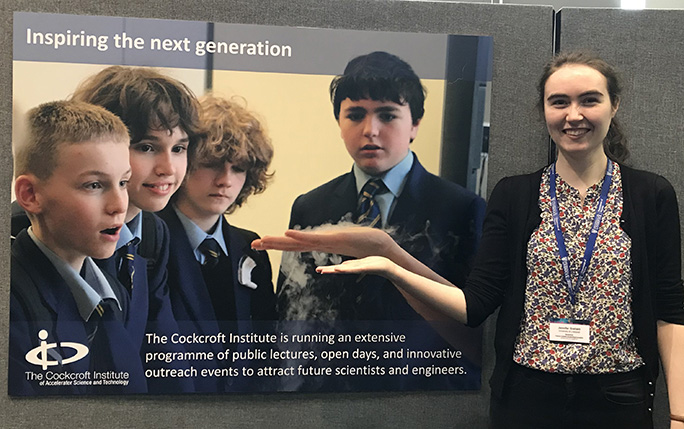 When people ask me why I chose to study physics, I don’t have a grand reason like wanting to change the world or prove someone wrong, I simply really loved learning about it. At school my favourite subject was always maths, and initially what attracted me to physics over the other sciences was that physics was the most similar to maths. At my school, very few girls in my year took sciences, at A-level I was the only girl in my physics and further maths class, with the other subjects only having one or two more. However, at the time, I can’t say that I particularly noticed and it certainly didn’t affect my decision to study these subjects. When it came to choosing which subject to study at university, what ultimately swung it for me was that I wanted to try out doing some experiments as at school we didn’t really get the chance to do that.

I did my undergraduate degree, an integrated masters in physics at the University of Liverpool. I found myself in a very fortunate position in that I was spoilt for choice when it came to deciding which research area to focus on. One thing I knew was that even though theory was interesting, sitting at a computer all day coding was not going to be right for me. So, in my third year I decided to get some experience and tried an interdisciplinary chemistry and physics project at the recently opened Materials Innovation Factory. Over that summer I found that this research area had a great mix of hands-on experimental work and data analysis, based on a complex and interesting theory that is rooted in rich physics. Having enjoyed this so much, I asked to stay in the same group for my masters project and recently began my PhD with them, which is jointly funded between Liverpool and the Institut Laue-Langevin, a neutron facility in Grenoble, France. The aim of my PhD is to better understand the interplay between different types of disorder in magnetic materials. To achieve this, we combine computer-aided materials design, inorganic synthesis methods and neutron scattering measurements. As part of my PhD, I get the chance to spend two years working at the ILL, which is very exciting as its such an international facility and very different to anything I’ve done before.

When people ask me why I chose to study physics...I simply loved learning about it.

During my time at Liverpool, I have been part of the physics outreach group where we often give talks to schools about different aspects of science they may not encounter in the classroom. In the introduction of our shows we often ask the kids to describe what a scientist looks like, we want them to describe a stereotypical scientist; old man, crazy hair, labcoat and goggles. However more and more frequently, one of the students will say that a scientist can be anyone – this is absolutely the correct response however does completely ruin the punchline of my joke! Another word that comes up frequently is that you have to be “clever” to be a physicist, while a good grounding in maths is useful, most physicists are not Einstein’s, they are just regular people with a sense of curiosity. A lot of people rule out physics too quickly without realising how broad and diverse it can be, but I can’t think of any other subject that encompasses so much, from the smallest things, quarks and subatomic particles, up to the galaxies that make up our universe and everything we know.