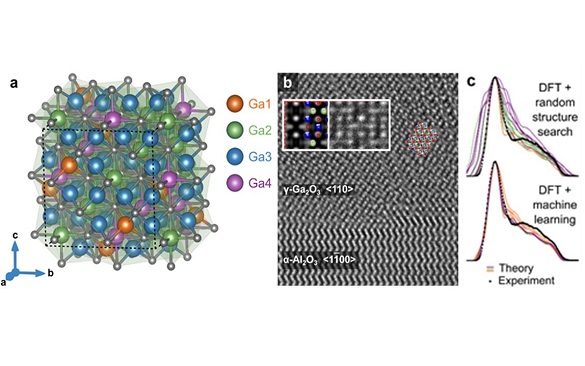 Researchers at the University of Liverpool, the University of Bristol, University College London (UCL), and Diamond Light Source have developed new understanding of gallium oxide by combining a machine-learning theoretical approach with experimental results.

In a paper published in the journal Advanced Materials, researchers used a combination of theoretical approaches and machine learning techniques to identify the key characteristics of gallium oxide, a material that has promising applications in power electronics and solar-blind photodetectors.

Gallium oxide presents a particular challenge across synthesis, characterisation, and theory due to its inherent disorder and resulting complex structure – electronic structure relationship.

It has five different phases or crystal structures, known as alpha, beta, gamma, delta and epsilon. The gamma phase was first suspected to exist in 1939, but it remained largely elusive until 2013 when more details of its structure were found using neutron diffraction. It has four inequivalent gallium lattice sites that are partially occupied in an inherently disordered structure, so that in spite of its deceptively simple cubic symmetry, it is in fact immensely complex. The enormous number of possible crystal structures makes conventional theoretical approaches impossible.

Lead author of the study, Dr Laura Ratcliff from University of Bristol’s Centre for Computational Chemistry, said: “To address the challenge of developing a robust atomistic model, first principles calculations are combined with machine learning to screen almost one million possible structures in 160-atom cells. The predicted low energy configurations provide a good description of the experimental data, whilst clear deviations are found for the higher energy configurations, confirming that these are not a realistic description of the disorder in gamma-gallium oxide.”

Dr Anna Regoutz of the Department of Chemistry at UCL said: “Our data from the Diamond Light Source and from collaborators around the world was crucial for validating the theoretical findings."

Tim Veal, Professor of Materials Physics at the University of Liverpool, added: “This detailed understanding of the influence of structural disorder on the electronic structure of gamma-gallium oxide is crucial to provide a firm knowledge base for this and other disordered materials. This enables furthering optimisation and implementation across different applications of this and related materials.”

Dr Leanne Jones, a PhD student from the University of Liverpool's Department of Physics and the Stephenson Institute for Renewable Energy who worked on the study, said:  “This research addresses a gap in our understanding of this material and will help gamma-gallium oxide to reach its potential in applications.”