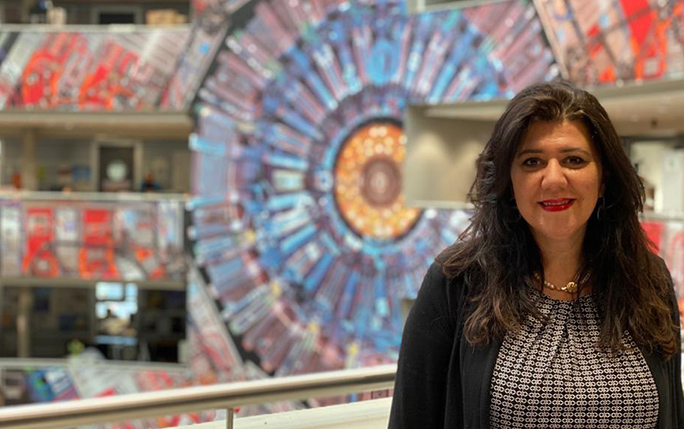 I have always wanted to be a scientist, since I was in primary school and I did not know what it really meant…. I was fascinated by the mysteries of the Universe, by stars and planets, so when I turned 10, I got as a gift my first telescope. I still remember how happy I was while looking at the sky at night with my dad and my brothers, trying to identify mountains on the Moon or the Saturn rings. Once in high school I started questioning what stars were made of, so I learned about the infinitely small particles that constitute the building blocks of matter, the quarks and the leptons, and the forces and energy fields that affect them. It was love at first sight, and that’s how I decided to study Particle Physics and graduate at the University of Pisa. After graduation, I “paused” a bit, asking myself if a PhD was really what I wanted to do. I even taught math and physics in high school for a couple of months. But very soon I realized that being a physicist and trying to uncover the secrets of Nature was really my dream. I got my PhD at the University of Geneva in Switzerland with a thesis that covered activities within two major international experiments: CDF at the Fermi National Laboratory, at the time collecting proton-antiproton collisions from the Tevatron, and the ATLAS experiment at CERN (Geneva), by then still in its initial preparation stages.

Very soon I realized that being a physicist and trying to uncover the secrets of Nature was really my dream.

In the following years I had a chance to work at CERN and at Fermilab before joining the University of Liverpool in 2010 as Advanced Particle Physics Fellow and lecturer.  I used data collected by the CDF experiment first, and the ATLAS experiment then, and I collaborated with hundreds of physicists across the globe to answer the many open questions left unanswered by the so-called “Standard Model of Particle Physics”: what is the nature of “dark” matter? Why there is so little antimatter in the universe? Are there other particles which we haven’t seen yet?;

I have initiated and led major searches for new phenomena at the core of the world-wide physics programme, particularly in the context of Supersymmetry, a proposed theory that foresees the existence of several new and heavy particles, including the “right” dark matter candidate. The desire of a deeper and more complete understanding of our Universe at the most fundamental levels has been my driver ever since I started my career in academia. As a professor at the University of Liverpool, I am the leader of the local ATLAS team, and I also collaborate to the development of long-term High Energy Physics projects at CERN and beyond.

I am fortunate enough to work with excellent and motivated students and supervise their first steps as physicists. Training and supervision of post-graduate students and undergraduate-level teaching have been one my major investments in the past few years. I am also convinced that fundamental science plays an important role in fostering critical thinking and creativity, so I particularly like to engage in outreach activities. In the end, it is thanks to scientists that spent time teaching me about their research that I am here now! While I tell people about my journey as a physicist and I try to transmit my enthusiasm for this job, it is nice to feel once again like the little kid I was many years ago.