Star Wars: from The Force to R2D2, does the science hold up? 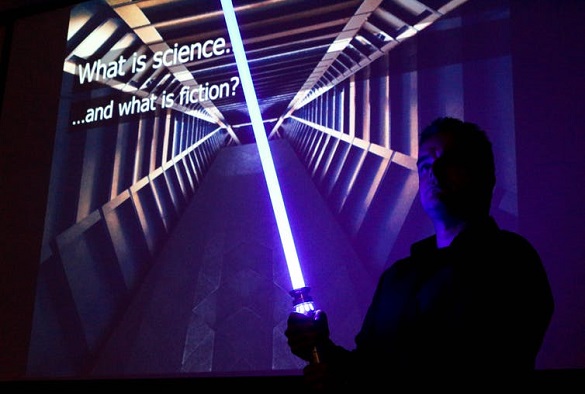 This article by Professor Carsten Welsch, Head of the Department of Physics, was first published by The Conversation:

Star Wars: The Rise Of Skywalker, the final film in the epic Star Wars series, will hit the big screens on December 19. Science fiction in general – and Star Wars in particular – is a hugely popular genre, much because of the titillating possibility that the mind-blowing technology we see on screen could one day work.

But what is science and what is fiction in Star Wars? Could the technology be ahead of actual science?

The Force is at the heart of the Star Wars universe. It “gives the Jedi his powers. It’s an energy field created by all living things. It surrounds us, it penetrates us, it binds the galaxy together” as Obi Wan Kenobi once explained to Luke Skywalker. But is there any science to back this up?

Our current understanding is that there are four fundamental forces in the universe: the electromagnetic force, the gravitational force and two different forces that control the atomic nucleus and its particles.

But you need different theories of physics to describe these forces. Quantum mechanics, which explains the nuclear forces, is notoriously incompatible with general relativity, which describes gravity. It is the holy grail of physics to try to combine these theories and unify all the forces into one “The Force”.

Science does however support the idea of an energy field that “surrounds everything”. In fact, if you take out all the stuff in the universe – the galaxies, planets and people – you are left with an exotic kind of energy in empty space itself. Curiously, this kind of energy of nothingness can actually give rise to forces, as implied in Star Wars. That said, its effect is tiny and it certainly can’t give anyone special powers.

To explore the forces of the universe, physicists use accelerators to create and study particles associated with forces that – in some cases – have not been produced since the Big Bang itself. One example was the Higgs Boson that was discovered in 2012 by the Large Hadron Collider (LHC) at CERN in Switzerland.

The LHC is world’s largest and highest energy accelerator and will soon receive an upgrade, further increasing its discovery potential.

Light sabres are one of the most famous weapon in film history. They are used by the Jedi and Sith and require knowledge of the Force so they can be controlled. Unfortunately, a real-world light sabre cannot currently be manufactured. One problem is that there is no way to make light emanate from a source and stop after only a metre – light will go on to infinity unless it hits something. Also, two intense light beams would cross each other.

However, the name “light sabre” could be misleading. There is a way to make something similar to this awesome weapon using plasma – a fourth state of matter consisting of highly charged particles. The blade could be made of plasma and be confined with an electromagnetic magnetic field. Theoretically, such a plasma sabre should be able to do many of the things the light sabres in Star Wars do. They may be more deadly though.

We are still far from having such a technology available though. One much less glamorous use of plasmas is to melt and weld metal. There are more exciting innovations using high-energy plasmas in the works though. For example, plasmas are now used to propel charged particles to high velocities over extremely short distances. This is helping scientists to design and build ever more compact particle accelerators, potentially up to 1,000 times smaller – and considerably less expensive – than current radiofrequency-based accelerators such as the LHC.

In this approach, a high intensity laser or particle beam is directed through a plasma medium. This creates a wake in the plasma, very much like the wake created by a boat running at speed along a river or lake. This allows the creation of a strong electric field which can be used for accelerating a beam of charged particles that is injected into this wake at the right time.

The hope is that plasma accelerators will pave the way for compact facilities being used for anything from imaging ultra-fast phenomena to testing innovative materials for industry.

In the very first Star Wars movie, Luke Skywalker uses “proton torpedoes” to destroy the Death Star – the giant space station that obliterates planets. According to the Star Wars canon, these are a type of explosive warhead which releases clouds of high-energy proton particles (protons make up the atomic nucleus with neutrons). In Star Wars, these weapons are exceptionally manoeuvrable so they can be used against a variety of targets. This isn’t the case for actual torpedoes though.

More than 40 years on, protons are instead used in a different kind of war – that against cancer. Proton beams can penetrate tissue for a specific distance determined by their energy. They can deposit most of this energy at a specific location, destroying a target tumour but sparing healthy tissue. This is becoming a rapidly developing method of cancer treatment.

To further improve the technology, particle accelerator and clinical experts have been exploring ways to better control proton beams through online beam monitoring. Among others, instruments originally developed for the LHC are used to measure the detailed properties of the treatment beam without touching it. This helps target tumours with more precision and also helps reduce machine set-up times, allowing the treatment of more patients.

While we cannot currently build droids such as R2D2 or C3PO, research into Big Data Science, machine learning and artificial intelligence brings these technologies ever closer. So far, AI can already sort things, play games, diagnose disease and predict scientific discoveries. But it is still a long way from being able from developing general intelligence – and it is notoriously bad at conversation.

As the voiceover of Luke Skywalker says in the latest film trailer: “We’ve passed on all we know.” And that’s exactly what I and other researchers are trying to do. So let’s hope this article can inspire some readers who dream about what science could achieve in the next 40 years to become the next generation of scientists.