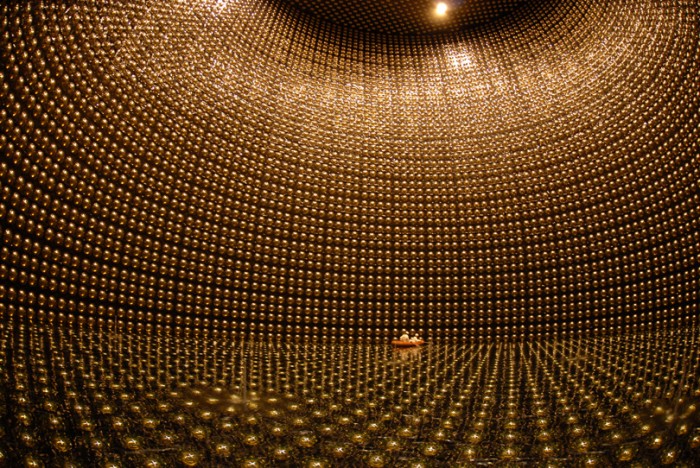 Scientists at the University of Liverpool have contributed to new research that puts further support behind the theory that neutrinos are the reason the universe is dominated by matter.

Understanding whether neutrinos and antineutrinos behave differently is important, because if all types of matter and anti-matter behave the same way, they should have completely wiped each other out shortly after the Big Bang.

Instead matter dominates and these new experimental results show a difference in the way neutrinos and antineutrinos behave - which could help us understand why there is so much matter in the universe, but very little anti-matter.

Professor Christos Touramanis from the University of Liverpool's Department of Physics said: “We are very excited by this ground-breaking result. We started the Liverpool neutrino group 15 years ago and we invested heavily in the construction of important detectors for the T2K experiment, and in leading the science harvesting of the data collected by the international collaboration.

“This new result exceeds our original hopes for the discovery potential of T2K. It also fills us with confidence that major discoveries lie ahead of us in the next generation of neutrino experiments, in the preparations for which we are leading at international level.”

Liverpool's Professor Neil McCauley added: "One of the biggest question physics asks is how are matter and antimatter different. Our current knowledge cannot explain why the Universe is made of matter and why this was not all annihilated with antimatter after the big bang. These exciting new results show that neutrinos have the potential to be the answer to this question."

Neutrinos and antineutrinos can come in three ‘flavours’, known as muon, electron and tau. As they travel, they can ‘oscillate’ – changing into a different flavour. To explore these changes in neutrinos the T2K experiment fires a beam, which can be switched from neutrinos to antineutrinos, from the J-PARC laboratory on the eastern coast of Japan to the Super-Kamiokande detector 295km away. At the detector scientists look for differences in how the neutrinos or antineutrinos changed flavour and are now finding that neutrinos appear to be much more likely to change than antineutrinos.

While this result shows a strong preference for enhancement of the neutrino rate in T2K, it is not yet clear if CP symmetry is violated or not. To improve the experimental sensitivity to a potential CP symmetry violating effect, the T2K Collaboration will now upgrade the near detector suite to reduce systematic uncertainties and accumulate more data, and J-PARC will increase the beam intensity by upgrading the accelerator and beamline.

Reviewing these results and looking ahead to what comes next Professor Morgan Wascko, international co-spokesperson for the T2K experiment from the Department of Physics at Imperial College London said “From the earliest days of T2K, the UK universities and national laboratories have played major roles in the near detectors and the neutrino beam, and of course in data analysis. In the past five years, we have also now expanded into the far detector, Super Kamiokande, and are looking to expand our work into the accelerator that feeds the neutrino beam as well."

T2K (Tokai-to-Kamioka) – is an international experiment led by Japan and part funded by the UK’s Science and Technology Facilities Council (STFC). It probes the strange properties of the enigmatic neutrino to unprecedented precision, by firing the most intense neutrino beam ever designed from the east coast of Japan, all the way under the country, to a detector near Japan’s west coast.

The T2K experiment was constructed, and is operated, by an international collaboration that currently consists of nearly 500 scientists from 68 institutions in 12 countries.