A neutrino observatory. Measurement of neutrinos from the atmosphere, the Sun, supernovae and from the T2K neutrino beam.

Neutrinos, the lightest and most elusive elementary particles, come in three flavours and can oscillate between those as they travel. Neutrino oscillations demonstrate that neutrinos have non-zero mass, which is neither a prediction of, nor a trivial addition to, the Standard Model of particle physics. Takaaki Kajita won the 2015 Nobel prize in physics for the observation of neutrino oscillations in atmospheric neutrinos with Super Kamiokande.

Situated 1 km under a mountain in western Japan Super Kamiokande is a 50 kton water Cherenkov detector observing neutrino interactions via 13000 photomultiplier tubes. Super Kamiokande makes world leading measurements of atmospheric and Solar neutrinos, searches for bursts of neutrinos from galactic supernovae and searches for proton decay. It also acts as the far detector for the T2K experiment. The Super Kamiokande tank was opened for refurbishment in 2018 to allow for the addition of Gd to the water providing sensitivity to neutrons and widening the physics programme of the experiment. This in particular vastly improves the sensitivity of the experiment to the diffuse supernova neutrino background. 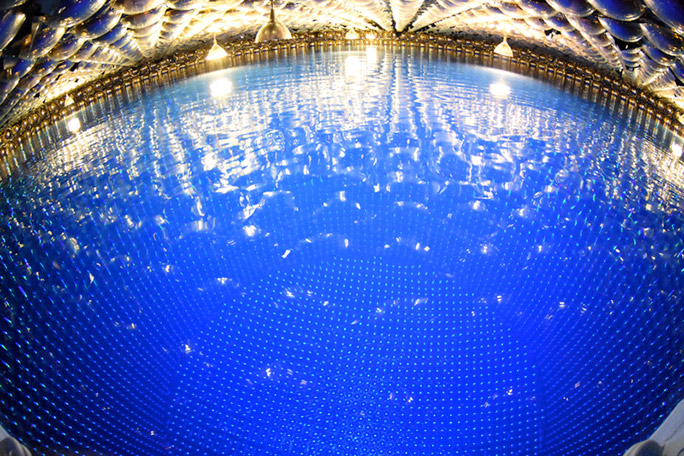 ‌‌The top of Super Kamiokande during the 2018 refurbishment.