LZ is a large scale 2nd generation experiment being built for Dark Matter searches. The latest estimates show that the total energy balance of the Universe has contributions from ordinary matter (4.9%), Dark Matter (26.8%) and Dark Energy (68.3%). The two latest contributions require new physics models to explain their nature. The measurements are consistent with Dark Matter particles interacting weakly and having density about 0.3 GeV/cm3 near the Earth. These particles may be discovered by the LZ experiment which will have the best sensitivity among all the experiments with similar timescale for particles with masses from 10GeV to 10TeV. The LZ detector will consists of 7 tonnes of liquefied xenon as the target material which will be surrounded by outer detector made of gadolinium loaded liquid scintillator (27 tonnes) and water (228 tonnes). The detector will be based in the former Homestake gold mine (South Dakota, USA) at the depth of about 1 mile. Though the rocks will protect the detector from cosmic radiation, the water and liquid scintillator will form an additional active veto system protecting from very rare remaining cosmic muons as well as from external and internal radiation.

The Liverpool Dark Matter group joined the LZ project in 2014. The planned technical contribution to the project is the optical calibration system for the outer detector. The Liverpool group will be actively involved into the data analysis. 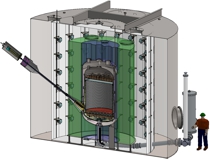