Nuclear proliferation is an increasing security concern. Nuclear reactors produce of the order of 1020 anti-neutrinos per second, per gigawatt of thermal energy.  These subatomic particles pass almost unhindered through any material and cannot be shielded by any known method. This makes them an ideal probe for reactor activity. The anti-neutrino emission rate can be used to infer information on the core state, whilst its rate-of-change and anti-neutrino energy spectra could potentially indicate the fuel burn-up, providing a powerful tool for safeguards.

At the University of Liverpool, we have developed a compact ton-scale anti-neutrino detector based on a heavily modified design of the T2K electromagnetic calorimeter. The device detects inverse beta decays caused by anti-neutrinos using plastic scintillator - an inert and safe material - and silicon photomultipliers (SiPMs). It has been adapted for above ground operation inside a self-contained 20 ft. ISO shipping container. A “drop-in” deployment with minimal intrusion was demonstrated at Wylfa Magnox, Nuclear Power Station, Anglesey North Wales over 60 m away from the core.

The first phase of the project was funded by STFC Follow-On-Funding, the STFC IPS scheme and a Royal Society Equipment Grant. The field test on-site was made possible by the support from the Office for Nuclear Regulations (ONR), the Department of Energy and Climate Change (DECC) and the UK Support Programme to the IAEA (UKSP).

We are currently working with NNL to calculate the anti-neutrino flux and spectrum from fission in the Wylfa reactor core using both reactor simulation codes and the underpinning nuclear data to estimate the uncertainty of such calculations.  The results show agreement to within a few tens of percent against the available experimental measurements.

The second phase of development, an upgraded detector named “Vidarr” intended to demonstrate a TRL of 7 (technology capable of deployment) is currently underway funded by Innovate-UK, in collaboration with our Innovation Partner JCS Nuclear Solutions Ltd.

Liverpool hosted the conference on Applied Anti-Neutrino Physics in 2016 (AAP2016): 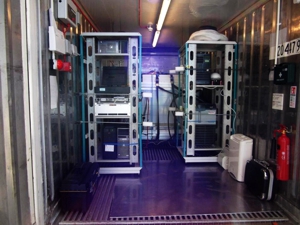 The anti-neutrino reactor monitor in an ISO shipping container. 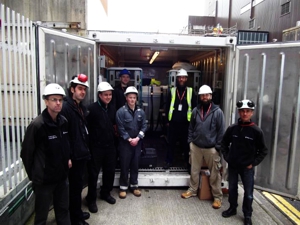 The reactor monitoring team with some of the Wylfa staff during installation.