The CERN/RD50 is a project to develope radiation hard semiconductor devices for very high luminosity colliders. The CERN collaboration has over 260 scientists from 48 institutes in Europe, USA and Asia. Liverpool was a founding member of RD50 in 2002, since 2010 Dr Gianluigi Casse of the Liverpool group is the co-spokesperson of the collaboration.

RD50 was started with the aim of investigating the possibility of efficiently operating semiconductor detectors after 10 times higher radiation doses than the current LHC experiments must withstand. These devices should be operational after fast hadron fluences of the order of 3 x 1016 1 MeV neutron equivalent per cm2, as expected for example for the luminosity upgrade of the LHC.

The deployement of full semiconductor (silicon) trackers is one of the main point for the upgrades of the current experiments to the High Luminosity LHC and radiation tolerance to the extremely high radiation doses is one of the key challenges. The RD50 collaboration has achieved important milestones having produced the most radiation hard sensors in the world and having established techologies and procedures that are already baseline for the uprading detectors including ATLAS, CMS and LHCb.

In fact, RD50 devices are capable of operating beyond the radiation levels stated above, under the right operating conditions. Among the many achievements of the collaboration the most notable are:

Many other improvements to sensor technologies are also studied, such as:

These activities make the RD50 collaboration a key player in the advanced detector community. 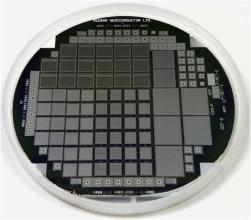