The Particle Physics group of the University of Liverpool is world leader in the development of radiation hard silicon detectors. Solutions that have been pioneered in Liverpool are now baseline for the detector upgrades at the future High-Luminosity LHC (HL-LHC) at CERN. We have proven the ability of planar silicon detectors to operate after doses as high as 2.0x1016 1MeV neutron equivalent (neq) cm-2 (~1 Grad). We have provided the first evidence for the mechanism that allows this extreme radiation tolerance, namely the impact ionisation by hot electrons in the high electric field near the junction of heavily irradiated silicon sensors. We have a long experience in designing sensors for high energy physics tracking application, both pixel and microstrip detectors. We are investigating applications of our devices in other areas like medical physics and homeland security.

We enjoy a central role in the ATLAS HL-LHC programme and in the CERN-RD50 collaboration, dedicated to the development of extreme radiation tolerant sensors for future super-colliders.

We perform our research accessing the JIF financed Liverpool Semiconductor Detector Centre (LSDC) that delivered both the ATLAS EndCap-C array and the LHCb Vertex Locator. The former array of 9 discs consisted of 988 silicon modules (400 of these being connected with 1600 wire-bonds each, and tested at Liverpool) which were mounted, fully characterised and then integrated into the array of 9 discs which were operated at -10oC in the large environmental chamber of the LSDC prior to shipment to CERN. All 42 LHCb double-sided vertex locator modules were fully assembled, bonded, tested and delivered by Liverpool. 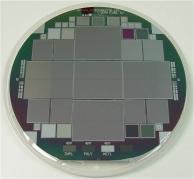