The Liverpool University Particle Physics Group is one of the largest in the UK with a comprehensive programme of research into the fundamental particles and forces of nature conducted primarily at international research facilities on three continents.

We are members of the world’s largest, and highest energy experiment: ATLAS at the Large Hadron Collider  (LHC) at CERN. At the LHC we also work on the LHCb which is currently the frontier b-physics experiment.  Also at the LHC we are members of the FASER experiment, searching for light and weakly interacting particles. Our physics at the LHC covers Higgs, Standard Model and Beyond Standard Physics studies including rare b-quark decays.

Within our neutrino programme we are active in the data-taking T2K experiment in Japan. We are also involved in preparations for the SNO+ experiment studying the Majorana nature of the neutrino as well as for the SBND and Hyper-Kamiokande experiments. We are driving the proto-Dune collaboration in anticipation of the future DUNE experiment.

New to our programme are ultra-precision frontier studies of the charged leptons. We built the tracking detectors and analyze data for the g-2 experiment at FNAL. We are looking for evidence of charged lepton flavour violation in the mu3e and mu2e experiments to complement ongoing studies at the LHC.

The group is also building an activity to study the dark universe, both dark matter and dark energy, including our in-house laboratory based search for dark energy. We have joined the LZ experiment to search for evidence of WIMPs using a terrestial detection technique.  We are also part of the CTA experiment, expanding the groups involvement in experiments at the frontier of astronomy and particle physics.

We continue to  lead the design of future detectors, with work lead by Liverpool staff on RD50 setting the benchmark for high radiation tolerant silicon detectors. This work is performed in close collaboration with the FBK (Trento). We are pioneering the optical readout of liquid argon detectors (used to study neutrinos) with our Ariande programme. The group is unique in the UK with its CMOS design team which is contributing to the UK CMOS initiatives to build radically new detectors for particle physics.

Interested in doing a PhD with the Liverpool Particle Physics group? Then look here.

The group's activities are funded by the Science and Technology Facilities Council (STFC), the Engineering and Physical Sciences Research Council (EPSRC), the European Union and the Higher Education Funding Council for England (HEFCE). The group also collaborates with industry on detector development, and, through the Cockcroft Institute, on innovative accelerator R&D.

You can find out more about the group's strategy towards making fundamental measurements and discoveries here.

If you want to find out more about studying or working with the group please follow the links or contact us.

檢視此頁的繁體中文網頁
(View this page in Chinese) 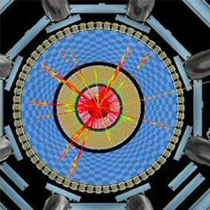 A simulated ATLAS event, one of the LHC experiements constructed with detectors designed and built in Liverpool.