Political events of the past year indicate a pressing need to understand the ways in which language can be used to influence and to manipulate, particularly in relation to an electorate choosing how to cast its vote.

Present day linguistics has a vital role to play here; Critical Discourse Analysis, for instance, studies examples of language use to reveal how specific choices made by speakers and writers can introduce persuasive ideological assumptions, often concealed beneath the surface message. Critical Discourse Analysis traces its origins to the final thirty or so years of the twentieth century, but a striking and surprising precedent for its approach can be found several decades earlier in the writings of the philosopher L. Susan Stebbing.

The precedent is surprising because Stebbing belonged to what is sometimes known as the tradition of ‘ideal language philosophy’: the school of thought that eschewed real language use as messy and imperfect and concentrated instead on logical analysis. However, she came to believe that a commitment to logic and an interest in practical affairs were far from incompatible. Driven by the social and political crises of the mid twentieth century, she argued that ordinary people should be empowered to harness the forces of close linguistic awareness and logical argument to confront uses of language designed to influence their opinions.

Born in London in 1885, Stebbing was christened ‘Lizzie’, a name which she disliked and soon dropped in favour of her middle name. She single-mindedly pursued a higher education and then an academic career in the face both of life-long ill health and of often explicit prejudice against women in University life. She studied at Girton College, Cambridge, long before that University awarded degrees to women, and then moved to King’s College London, where she was able to study for an MA in Moral Science, graduating in 1912. She spent most of her working life teaching at Bedford College for women, in the University of London, making the national newspapers in 1933 when she became the first woman in the UK to be appointed to a full professorship in Philosophy.

Stebbing established a reputation for her contributions to current debates about analysis, logic and scientific understanding. At the time, the study of logic was dominated in Britain by Principia Mathematica, a dauntingly technical multi-volumed work published by Alfred Whitehead and Bertrand Russell between 1910 and 1913. The authors proposed a closed, formal system, immune to the vagaries of the actual world, which could express the truths of both logic and mathematics. In A Modern Introduction to Logic, published in 1930, Stebbing set herself the task of making these ideas accessible to undergraduate students of philosophy. In order to do so, she drew on everyday examples of language use and of problem solving to explain how language and logical reasoning work, and where errors can occur.

Stebbing became increasingly convinced that clarity in matters of language and logic should not be seen as belonging to a dry, autonomous discipline, but had much to contribute to our understanding of our social and political environment. In 1939 she published Thinking to Some Purpose, motivated by what she described as ‘the urgent need for a democratic people to think clearly without the distortions due to unconscious bias and unrecognised ignorance’. The book is full of analyses of actual uses of language by those trying to persuade others to take a particular course of action: advertisers, journalists, clergymen and, particularly, politicians. Stebbing urges her readers to hone their critical skills in order to identify uses of language that introduce unsupported assumptions or unjustified conclusions. 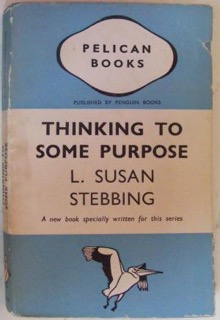 Here are three examples of the types of problems Stebbing identifies. Firstly, she picks up on the misleading use of individual words, for instance accusing the Conservative MP and some time Prime Minister Stanley Baldwin of using ‘bias’ and ‘favour’ as if they were interchangeable; the former, reserved for his Liberal opponents, ‘carries with it an emotional significance of having prejudged the matter’ in a way in which the latter does not. Secondly, she calls out politicians for using pseudo arguments with no basis in logic. Lord Halifax, Conservative Secretary of State for War, faced protests that a number of army officers with responsibility for purchasing munitions had recently left the military for well-paid jobs with private arms firms. Lord Halifax claimed that ‘having perhaps some little knowledge of human nature’ he considered arms dealers to be as trustworthy as anyone else. Stebbing detects ‘prestige suggestion’ in this argument; Halifax was relying on his own position and social standing rather than on any relevant logical argument. Thirdly, she draws attention to the danger of setting up false semantic relations between words, such as the unlicensed tendency to use ‘nationalism’ and ‘internationalism’ as if they were logical contradictories; despite what some politicians would have us believe, ‘It does not follow that the welfare of this nation is logically incompatible with the welfare of other nations’.

In the final years of her life, Stebbing continued to write about the importance of clear thinking in the face of social and political division. She also worked hard to secure the safety of refugees from Germany and Nazi occupied countries. Along with her colleagues and students from Bedford College she was evacuated to Cambridge at the start of the Second World War, and she did not live to see its conclusion; she succumbed quickly to cancer in 1943 at the age of 57. At the time of her death, she was celebrated chiefly for A Modern Introduction to Logic, and for her achievement in making Russell and Whitehead’s arcane logic accessible to students. But more recent developments in the study of language, and indeed in national and international politics, suggest that it may be time to reassess the insight, even the prescience, that Stebbing showed in Thinking to Some Purpose, and in her critique of careless, thoughtless or deliberately misleading uses of language.