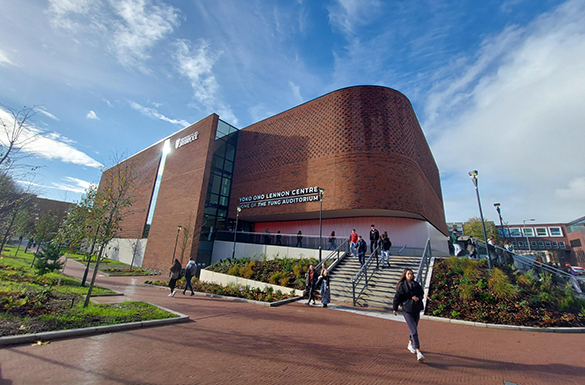 The University of Liverpool is delighted to announce it reached its £3 million fundraising target for construction of the Yoko Ono Lennon Centre, thanks to a generous gift from the Ono Lennon family.

The new state-of the-art cultural landmark, on the corner of Grove Street and Oxford Street, is well on the way to its official opening in March 2022, with pandemic delayed graduation ceremonies beginning in the space this month.

It is named in honour of Yoko Ono Lennon, an Honorary graduate of the University (Hon LLD 2001), campaign ambassador and long-standing philanthropic supporter.

As well as providing the latest teaching facilities, it will be home to The Tung Auditorium, a 400-seat acoustically optimised, flexible, music performance space, capable of facilitating chamber music, vocal groups, electro-acoustic and multi-media work, or an up to a 70-piece orchestra.

Tung Auditorium Artistic Director, Richard Hartwell, said: “We are so grateful for all the support we received to enable us to build the Yoko Ono Lennon Centre, and its state-of-the-art concert hall, The Tung Auditorium.

“It will be a fantastic addition to Liverpool to have a venue of this size and quality.

“We will present a core classical programme, but as the acoustics are adjustable, we can present a wide range of ensembles and artists from many backgrounds. It’s going to be a remarkable place to listen to live music and we can’t wait to start welcoming audiences in the spring!”

The Tung Auditorium is named in honour of The Tung Foundation, with more than 300 seats in the performance space sponsored by friends of the University though the in-demand Name A Seat campaign.

Yoko Ono Lennon said: “It gives me great pleasure to know that this centre will serve as a new opportunity for countless future artists and musicians to communicate their work with the local audience in Liverpool, and the world beyond.

“I can’t wait to see what exciting new work is on its way.”

The fundraising campaign will continue, despite hitting the £3million target, with plans in place to purchase a new Steinway piano for use by visiting artists, community groups and performers.

University of Liverpool Vice-Chancellor, Dame Professor Janet Beer, said: “We are extremely grateful to the alumni, donors and friends who have supported the University’s fundraising campaign to bring this new cultural landmark to the city. We look forward to welcoming people to the Yoko Ono Lennon Centre and Tung Auditorium next year.

For more information on the Yoko Ono Lennon Centre, and The Tung Auditorium, please visit: www.liverpool.ac.uk/yoko/