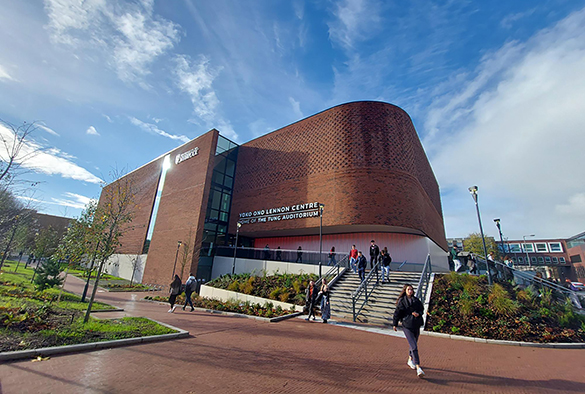 With a floor area totalling around 6500m2 the building was planned around a careful understanding of the site and an innovative response to a challenging brief (and budget).

The lectures theatres were arranged vertically which allowed for a much smaller building footprint – freeing up the site to deliver a linear public park alongside the main arterial route adjacent to the south elevation (Grove St). This also allowed for large volume and height of Tung Auditorium to be placed adjacent to the teaching spaces, separated by the main atrium circulation space.

The upper ground floor level is the main landing spaces and provides raised visibility on a key gateway onto the campus as well as a seamless transition to a new public plaza connecting (in the near future) the University’s Sydney Jones Library. The position of the café was to feed into this new public realm (as well as being readily accessible for its evening role as a bar serving the Tung). 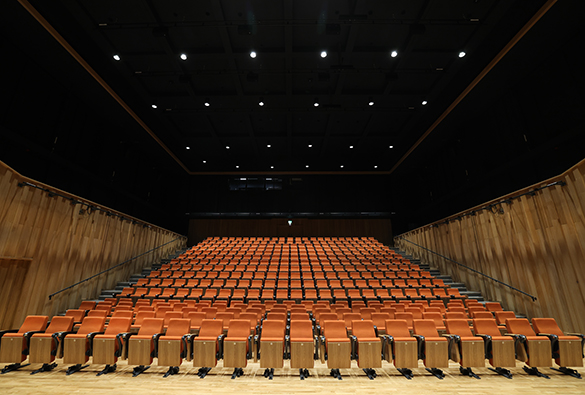 The Tung Auditorium is a 400 seat theatre that is designed primarily as a music performance space. The space also has the ability to be used as a lecture theatre but the brief also called for varied types of music performance – from orchestral through to jazz and rock. The potentially conflicting spatial and acoustic demands were a challenge for the team, but the resultant space is not a compromised one. There are a number of variable acoustic features within the auditorium that combine with the carefully crafted surfaces and materials to provide an acoustic environment that has already drawn admiration from performers, conductors technicians and audiences.

The staging and large areas of seating can be adapted and moved to allow for different types of performance and events, with a technical “attic” that sits above the space that also serves an acoustic function. 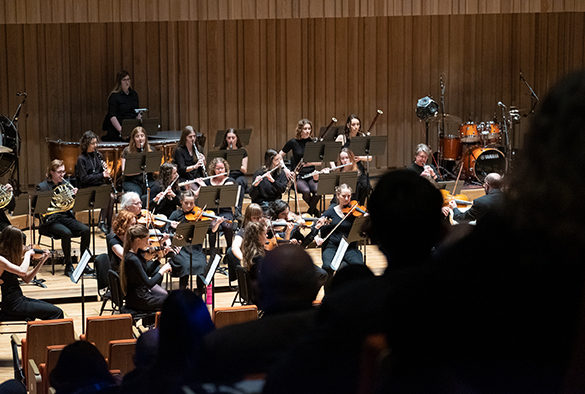 The space was designed to feel warm, welcoming and accessible and although the upper walls and ceiling are performing an important acoustic job they are deliberately played down to provide the focus on the performers and audience.

The Tung Auditorium Circulation was a key factor in the design of and disposition of the spaces, especially the theatres that have a combined occupancy of 1400 people. Using state-of-the-art flow modelling software the team tested various iterations of the main circulation spaces to reduce the amount of conflict points and congestion, especially important during the busy teaching days when cross over times are limited to ten minutes between lectures. The resulting building has a very simple and legible approach to circulation with the stacked theatres and use of the upper ground level as the principle “landing” to both east and west entrances. Although working across different levels the building incorporates a high level of inclusive access including: choice of seating positions for wheelchair users, evacuation lifts that serve all levels, and a “Changing Places” facility.

Externally the building’s form and materials relate to the robust architecture of some of Liverpool’s historic civic buildings and dockside architecture. It also responds to the immediate context of the Sydney Jones Library – in particular the use of a concrete plinth (which in itself is a reference to dock walls as practical and simple way to manage a busy edge).

The University of Liverpool was the original “red brick University” so the use of that material may seem obvious. The bricks here are more than decorative however, they are a key part of the acoustic strategy and were selected for their density as well the colour and tone. 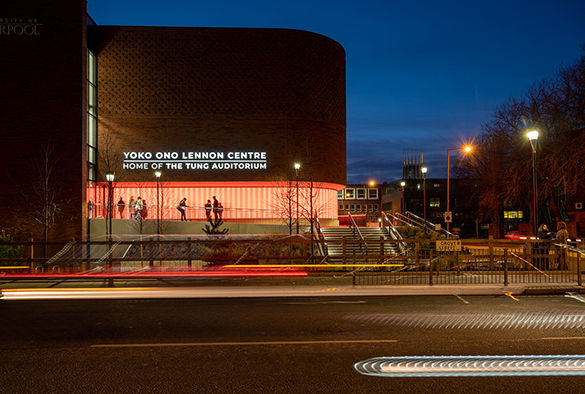 The large inward looking spaces of the theatres by definition are without external windows and openings which can lead to a lack of activation and interest – which are equally important on a gateway site such as this. The curved forms to the corners are used to both soften the impact of the mass (accentuated by the use of double stacked protruding bricks to catch the sun), and as a nod to the curves used in prominent corner buildings that we see across Liverpool.

A wrap of illuminated cast glass provides an injection of drama at the main entrance level facing the key junction – intended to back light people moving to and from the building and picking up on the importance of circulation to the core concept. The building has completed a key gateway onto the University campus and provides a new public facing front door that will make a significant contribution to the cultural life of the institution and city of Liverpool.

Mushtaq Saleri, Senior Associate, Ellis Williams, said: “This has been a tremendously rewarding project for the team to work on. Several of us are alumni of the University so it was even more of a personal connection to the project than normal, with a desire to deliver something special on this site.”

Yoko Ono Lennon said: “I am thrilled to be recognised with the naming of the new performance centre at the University of Liverpool. Thank you to the University and to the people of Liverpool for this wonderful honour. Liverpool has become part of me from years of going there, and with this new centre part of me will always be there – for that I’m very thankful. I think John is smiling about it too.

Richard Hartwell, The Tung Auditorium Artistic Director, said: “Due to its cutting edge design, The Tung Auditorium is possibly the finest concert hall in the world. The excellent acoustics will bring out the very best creativity in anyone who uses it, from students, tutors, youth groups, and amateur ensembles, to internationally acclaimed visiting artists.”

Professor Catherine Tackley BA (Hons), PGCE, PhD, Head of the Department of Music, said: “We are very proud of what the Yoko Ono Lennon Centre offers not only the University, but also the city and region. As well as offering a busy programme of public performance, our students will benefit from involvement in all aspects of The Tung Auditorium’s operation, from front of house to sound technician roles, delivering so much valuable experience as they look towards their careers.”