Topics in the dynamics of surface homeomorphisms

In topological surface dynamics, we study the iteration of homeomorphisms f:X->X of topological surfaces X, and in particular the orbits of points x of X, which are the (bi-infinite) sequences (f^n(x)), where f^n denotes the n-fold iterate of f (or the -n-fold iterate of f^{-1] if n is negative). x is said to be a period n point if f^n(x)=x, and n is the least positive integer for which this is the case.

Questions studied in topological dynamics include: what periods of points are there? How does the number of period n points behave as n goes to infinity? Are periodic points dense in X? If we "know about" a single periodic orbit (or a finite number of them), what can we deduce about the dynamics of f as a whole? What is the topological entropy (a measure of "chaos") of f? Can we get a lower bound on it from information about a few orbits of f? In the case of surfaces such as the annulus and the torus, what is the rotation set of f (i.e. at what speeds can points rotate around the surface under iteration)? In what ways can the answers to all of these questions change as we vary the homeomorphism f continuously? In what ways do they change in specific families of homeomorphisms?

Such questions can be asked in any dimension, but are particularly interesting in dimension 2. In one dimension the theory is very well developed and is largely combinatorial. The theory in two dimensions has a much more topological flavour, since there is room in X for the points of the same or different orbits to "knot around" each other in non-trivial ways. In three or more dimensions there is too much room, and the answers to many of the questions above are either trivial (knowing about a few orbits of f tells us pretty much nothing), or prohibitively difficult.

The key result which has driven much of the research in this area for the last 30 years is Thurston's classification of isotopy classes of surface homeomorphisms, which states that every surface homeomorphism can be deformed into ("is isotopic to") a homeomorphism g which is of one of three types: reducible, which means that the surface can be cut into topologically simpler pieces on which g acts independently; finite order, which means that g^n is the identity for some n; or pseudo-Anosov, which means that g preserves a transverse pair of singular measured foliations, stretching uniformly along one and contracting uniformly along the other: this produces chaotic dynamics which can nevertheless be studied very precisely using combinatorial techniques ("train tracks" and "Markov partitions"). Moreover, a pseudo-Anosov has minimal dynamics amongst all the homeomorphisms isotopic to it: therefore, if one can show that the homeomorphism f one is interested in is isotopic to a pseudo-Anosov g, then one obtains a calculable lower bound on the dynamics of f. I have broad interests within this general field: questions which interest me particularly at the moment are the study of "generalized pseudo-Anosovs", which are like pseudo-Anosovs but their invariant foliations can have infinitely many singularities; the study of rotation sets of torus homeomorphisms; and the use of Dynnikov's coordinate system to carry out explicit calculations on the boundary of Teichm\"uller space (roughly speaking, on the space of measured foliations).

Please feel free to contact me to discuss possibilities.

The following are possible project titles:

A holomorphic map $f$ in the plane preserves angles at every point $z$ that is not critical (i.e., $f'(z)\neq 0$). This \emph{conformality} is the geometric reason behind many of the surprising results in complex analysis. By the Riemann mapping theorem conformal maps are plentiful in the plane. On the other hand, they are very rare in higher dimensions.

Quasiconformal maps, and the closely related quasisymmetric maps, are maps that may change angles, but only up to a fixed multiplicative amount. These maps have become one of the most important tools in complex analysis. In addition, they provide an analog to conformal maps in settings where there are no conformal maps. Finally, such maps appear naturally in geometric group theory.

The \emph{quasisymmetric uniformization problem} asks when a given metric space is quasisymmetric to a given standard space. Very often the metric spaces that appear in this question are coming from a dynamical system. It turns out that in many instances quasisymmetric uniformization is equivalent to the question whether the dynamical system acts conformally. Of particular interest is the question when a metric $2$-sphere is quasisymmetrically equivalent to the standard $2$-sphere. This is closely connected to \emph{Thurston's classification of rational maps} as well as \emph{Cannon's conjecture}.

Here are some possible topics for ph.D. projects:

Recently the monograph ``Expanding Thurston maps'', jointly written with Mario Bonk, appeared. However, many open questions remain, in particular how these results can be extended to the non-expanding setting.

Mating is an operation that ''glues'' the dynamics of two polynomials together, to form a new dynamical system. Often, but not always, this results in a rational map. To decide when this is in fact the case is a difficult question. Unmating is the reverse procedure, i.e., geometrically decomposing a rational map into two polynomials. In both cases, there are many interesting open questions.

1. Ergodic theorems and their intimate relation to arithmetic questions

2. Non-linear Poincaré and multiple recurrence and the arithmetic of sets of integers of positive density

Professor Lasse Rempe-Gillen works in the field of one-dimensional holomorphic dynamics, that is, the iteration of functions of one complex variable. In particular, he is interested in the iteration of transcendental entire and meromorphic functions.

More precisely, let $f:\mathbb{C}\to \mathbb{C}$ be a transcendental entire function; that is, a complex differentiable function from the complex plane to itself that has an essential singularity at infinity. We think of this map as describing a dynamical system, and hence study the iterations $f^n:=f\circ f\circ\dots\circ f$ as $n\rightarrow \infty.$

The classical theory of holomorphic dynamics, due to Fatou, splits the complex plane into two subsets: the Fatou set, where the behaviour is stable, and the Julia set, where the behaviour is "chaotic". (The picture below shows part of the Julia set of a function of the form $f(z)=e^z+a$ for a certain complex parameter $a$, in dark grey, while the Fatou set is shown in colour. The black curves shown illustrate dynamically significant structures that can be found inside the Julia set.) Professor Rempe-Gillen's work, in a broad sense, is concerned with the question of understanding the structure of these sets and the behaviour of the functions on them. In particular, his work has connections with one-dimensional complex analysis (function theory) and point-set topology, particularly continuum theory. 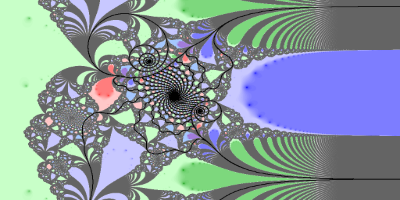 Recent work, in particular by Rempe, has made significant progress in understanding the topological structure of the Julia set of certain entire functions, but many questions still remain open. Recently, Mihaljevic-Brandt (while a doctoral student at Liverpool) was able to give a complete combinatorial description of the topological dynamics for a large class of “well-behaved” transcendental entire functions, each of whose Julia sets is the complex plane. (I.e., these functions are chaotic everywhere, but we can completely describe how the function behaves in combinatorial terms.) A possible PhD project would involve investigating in how far this description can be extended to larger classes of entire functions.

Devaney showed that this set has interesting topological properties (more precisely, it compactifies in a natural way to an indecomposable continuum). He conjectured that, for $-1
Resolving this conjecture is likely to be difficult, but there is an opportunity for a doctoral student to make significant progress on the problem. In particular, an interesting problem is to study the continua that arise from this construction from the point of view of continuum theory.

3. The study of measurable dynamics of transcendental functions

The study of Hausdorff dimension is closely connected to the measurable dynamics of the functions in question: that is, the study of natural invariant measures. (The idea is, roughly, that even though the behaviour of the map is chaotic, it may be possible to understand what the dynamics is like “on average”.) There has been much work in this area recently by a variety of researchers, but many interesting questions remain open. For example, a potential thesis project could investigate the existence of natural invariant measures for examples as described above, where the dimension of the set of bounded orbits is equal to two. (Standard techniques for constructing invariant measures for hyperbolic functions fail for these examples.)