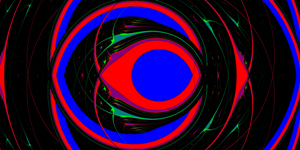 The work of the dynamical systems group includes complex dynamics, ergodic theory and its relation to arithmetic, and low dimensional topological dynamics.

Consider the movement of celestial objects in the solar system, or the development of the world's weather. Since the second half of the twentieth century, the fact that such systems frequently display so-called chaotic behaviour has received much  attention. In a chaotic system, a change in the starting conditions, no matter how small, may result in vastly different long-term behavior.

This is a startling prospect for any attempts at accurate predictions: even if we perfectly understood the rules which govern the evolution of the process, and even if we could measure the current conditions to a precision of several thousand decimal places, this would still not be enough to forecast the long-term behaviour! This explains why weather reports may be accurate for a day or even two, but predicting it weeks or even months in advance is virtually impossible – and we cannot expect marked improvements to be made in this, even over the next  decades or centuries.

Nonetheless, it is often still possible to answer qualitative  questions regarding such processes (whether they model real-life examples as the ones above, or are of a more theoretical nature). This study occupies a large field in both the pure and applied mathematical sciences, known as dynamical systems theory.