How effectively have governments responded to COVID-19 so far? 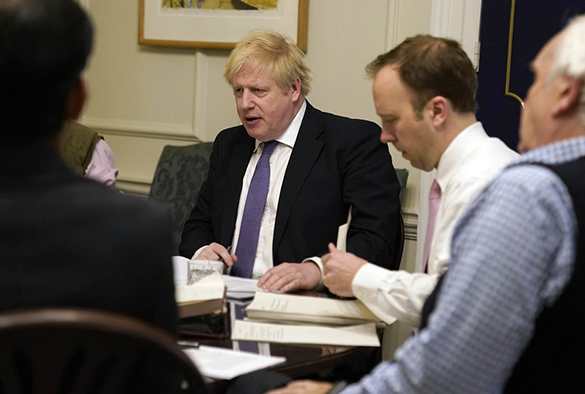 The spread of COVID-19 seems to be slowing down in many countries. Governments have employed a number of measures to reach this stage. In economic terms, month-long lockdowns are pushing the world economy into recession. The OECD predicts that each month major economies spend in lockdown will remove two percentage points from the annual GDP growth. The International Monetary Fund predicts that global growth will fall by 3% in 2020. The Bank of England forecasts that the crisis will result in the deepest UK recession in 300 years. In fact, the situation appears so grim that the Bank of England is considering negative interest rates for the first time ever.

At the same time, research flags the damaging effects caused by the lack of mitigation actions for the economy – as the infection spreads to workers, failure to mitigate its peak may trigger very large upfront costs in terms of output, consumption, and investment.

In new research, we used daily data on COVID-19-related deaths for 32 countries between January and April 2020 to assess the relationship between deaths and government interventions. Using statistical tests, we were able to identify a break in the growth rate of deaths country by country. Our findings suggest that for the UK, the ‘structural break’ in the growth rate of deaths occurred on 3 April; between one and two weeks after that for other European countries including Italy, France, Spain and the Netherlands. We also estimate that deaths in the UK grew by an average of 21.6% per day up to 3 April, after which it was suppressed to zero.

We then assessed the impact of government interventions on the average growth rate of deaths. To do so, we used the Oxford COVID-19 Government Response Tracker (OxCGRT) index which quantifies the stringency of policies adopted across the various countries. The index on any given day and country is the average of nine sub-indices: school closures, workplace closures, cancellation of public events, restrictions on gathering size, closure of public transport, stay at home requirements, restrictions on internal movement, restrictions on international travel, and public information campaign. Each of these takes a value between 0 and 100, with a higher value indicating more stringency. 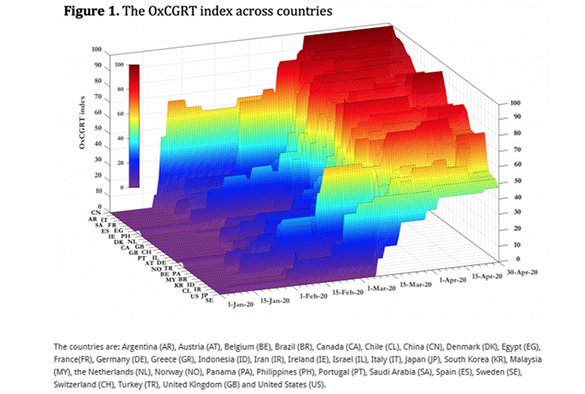 Using this index, we were able to confirm that the greater the strength of government intervention at an early stage, the more effective it was in slowing down or reversing the growth rate of deaths. Figure 2 shows that countries like the UK and the US, who were late in their response, register only a probability of 0.3% (or lower) of ensuring an insignificant growth rate of deaths as the outbreak evolved. This explains why these countries are still registering more deaths compared to others. Sweden, which adopted a far less stringent approach towards the pandemic, registers a 0% probability of slashing the growth rate of deaths. 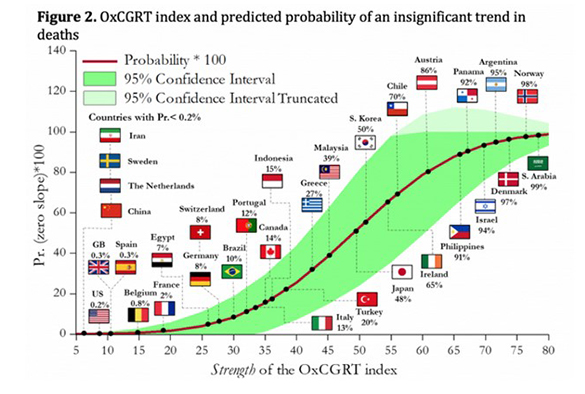 Much remains unknown about the effectiveness of individual interventions, such as school closures. Overall, however, our results suggest that the number of deaths related to the pandemic can be limited by strong government measures taken as early as possible. Norway, one of the first countries in Europe to impose a lockdown on 12 March, recorded a 98% probability of achieving an insignificant trend in COVID-19 deaths according to Figure 2. Contrast that with the UK which only introduced lockdown restrictions on 23 March and consequently recorded a 0.3% probability of achieving an insignificant trend in deaths. There is obviously a tradeoff between acting as early as possible to save lives and the adverse impact early interventions can have on the economy. This is an unresolved issue that merits proper empirical research.

Other issues that need to be investigated include the actual number of deaths related to COVID-19. Ongoing research by The Financial Times suggests that global deaths linked to COVID-19 may be 60% higher than currently recorded. In addition, further Financial Times analysis suggests that the UK has recorded the highest rate of death among 19 countries that produce comparable data. The UK government’s decision to implement a ’test and trace’ approach might go some way towards dealing with additional waves of the outbreak but it is not a panacea – not least because it remains unclear when the system will become fully operable and how exactly it will work.

What is clear to us is that early and strong interventions do save lives. Therefore, the UK should not hesitate to move fast by imposing another national lockdown if outbreak signals are received by the government’s Scientific Advisory Group for Emergencies.