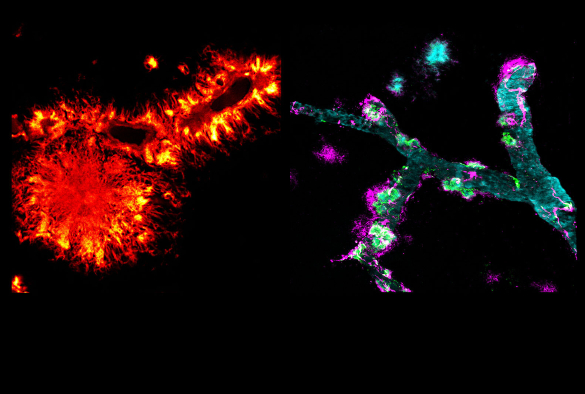 An international study involving University of Liverpool researchers has discovered a link between a protein called medin and Alzheimer's disease.

Published in the renowned journal Nature, the research shows that medin is deposited in the blood vessels of the brains of Alzheimer's patients along with the protein amyloid-β.

Medin belongs to the group of proteins known as amyloids. Of these, amyloid-β is best known because it clumps together in the brains of Alzheimer's patients. These aggregates then deposit both as so-called plaques directly in the brain tissue, but also in its blood vessels, thereby damaging the nerve cells and the blood vessels, respectively. But while many studies have focused on amyloid-β, medin has not been a focus of interest.

In this collaborative study, which was led by Deutsches Zentrum für Neurodegenerative Erkrankungen (DZNE), researchers were able to show in Alzheimer's mouse models that medin accumulates even more strongly in the brain’s blood vessels if amyloid-β deposits are also present. Importantly, these findings were confirmed when brain tissue from organ donors with Alzheimer's dementia was analysed. However, when mice were genetically modified to prevent medin formation, significantly fewer amyloid-β deposits developed, and as a result, less damage to blood vessels occurred.

"Medin has been known for over 20 years, but its influence on diseases was previously underestimated. We were able to show that pathological changes in the blood vessels of Alzheimer's patients are significantly enhanced by medin," says Dr Jonas Neher from DZNE, who led the study.

Expertise for the project was provided by Dr Jill Madine and Dr Hannah Davies from the University of Liverpool, who have been investigating medin protein aggregation and its potential role in cardiovascular diseases for many years with funding from the British Heart Foundation, and collaborating with DZNE since 2015.

The findings provide hope for the development of a new treatment, with the researchers concluding that medin could be a therapeutic target to prevent vascular damage and cognitive decline resulting from amyloid accumulation in the blood vessels of the brain.

Dr Jill Madine, a lecturer in the University’s Institute of Systems, Molecular and Integrative Biology, said: “We continue to work with Dr Neher and the team at DZNE to further our understanding of Alzheimer’s disease and areas for future therapeutic intervention following this new and exciting finding.”