Should Shamima Begum be stripped of her British Citizenship?

Please note that this panel discussion took place before news emerged that Shamima Begum's baby son had died. Some of our academics discussed the rights of Shamima's newborn son, Jarrah, and those arguments remain part of this write-up - still relevant, and important, to others in similar situations.

This was a cross cluster event hosted by academics working in the field of children's rights, immigration law, international criminal law, and international human rights.

The free event featured a panel of eight academics and a packed out lecture theatre of staff, students and interested members of public.

A terrorist threat, or a groomed child?

The evening featured short presentations from a variety of researchers from the School of Law & Social Justice, each offering their perspectives on the Shamima Begum case while drawing on international criminal law, human rights law, the law on statelessness and citizenship, children's rights law and media studies. 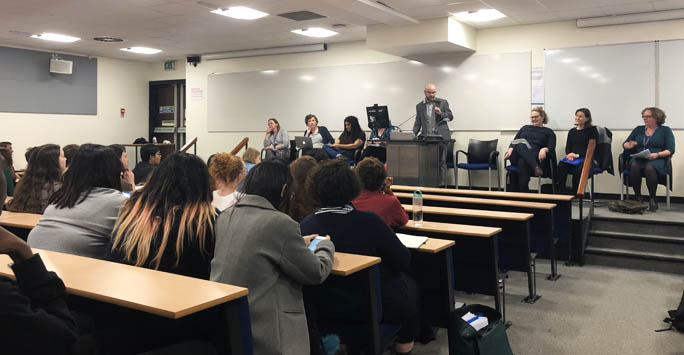 Presentations by the panellists

For information on upcoming events at the School of Law & Social Justice, please visit our Events page.