Rwanda deportations: what is the European Court of Human Rights, and why did it stop the UK flight from taking off? 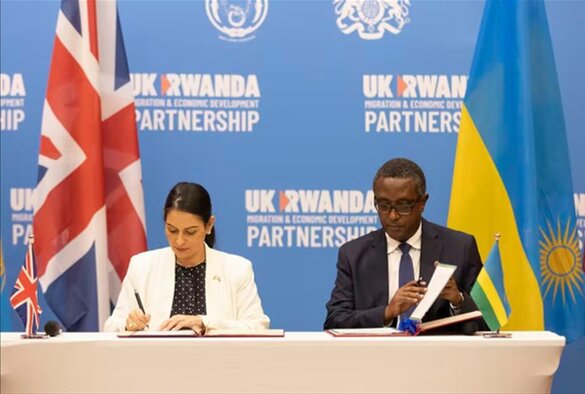 Kanstantsin Dzehtsiarou is a Professor in Human Rights Law in the University of Liverpool’s School of Law and Social Justice.

A flight chartered to send asylum seekers from the UK to Rwanda as part of a new government policy was grounded following an intervention by the European Court of Human Rights (ECHR). The plan to deport asylum seekers for processing in Rwanda is intended, the government says, to deter people from making the dangerous journey across the Channel to the UK. This first flight had been scheduled to take off on June 14 with just seven passengers on board. There had been more due to fly but legal action enabled them to be removed.

This decision has already sparked a very negative reaction from the UK government, which says that plans for future flights are already underway.

The ECHR issued specific interim measures ordering the UK authorities not to remove one of the asylum seekers for three weeks after the final decision of judicial proceedings that are ongoing in the UK. This in turn triggered national legal mechanisms that prevented the other six from flying to Rwanda. Although the measures indicated are temporary, the ECHR can choose to extend them.

Home secretary Priti Patel pointed out in Parliament that the court did not declare the Rwanda deportation plan to be unlawful. This is correct – the ECHR has not made any such determination. At this point, it only stated that the national and European courts should be given more time to decide this case properly. However, if the UK were to deport the person concerned before the ECHR measures expire or are lifted, it would then be violating international law.

What is the ECHR?

The ECHR is a Strasbourg-based human rights court that deals with compliance with the European convention on human rights. It can deliver legally binding judgments when the human rights of any person under the power of any of its member states are violated – including right to life, prohibition of torture, right to privacy and others. The court is not connected to the European Union, and after Brexit, the UK remains a member.

The court usually deals with violations that happen on the territory of the member state, but with exceptions. Deportation is one such exception – the court can prevent deportation of a person who is under the risk of being tortured in the receiving country. This is a well-established principle of human rights law.

Normally, victims apply to the ECHR after the alleged violation has already happened. However, in some cases when the situation is ongoing, the court can order authorities to act to prevent irreparable harm. When it comes to deportation, the logic is that removing a person from a state that adheres to the European convention on human rights to one that doesn’t makes it very difficult to ensure that their rights will be properly protected.

In this case, the court cited concerns raised by the UN high commissioner for refugees that asylum seekers moved to Rwanda as part of the plan will not be able to access “fair and efficient procedures” related to their refugee status claims. There was no guarantee that they would be able to return to the UK from Rwanda to take part in future judicial proceedings relating to their case.

Interim measures such as these are are legally binding on states but they are only issued in extreme and rare cases in order to prevent serious harm. The court’s interim measures were instrumental in saving Russian opposition activist Alexei Navalny when he was poisoned in Russia. Most often, interim measures are used when there is a threat of extradition or deportation to the country where the victims could be ill-treated.

Both Patel and prime minister Boris Johnson stated that they are not going to back off from the Rwanda deportation plan. This probably means that the UK authorities are considering withdrawing from the European convention on human rights altogether. This is something the government has been discussing for some time.

While no state has withdrawn from the convention in the past 50 years, if the UK does so it would follow Vladimir Putin’s Russia, which will cease to be a party to the European convention this year. Before Russia, the last withdrawal was Greece, which did so temporarily under the rule of a military junta in 1967. These are hardly good examples to follow.

The UK helped to build the Strasbourg system of human rights protection after the second world war and has continuously supported it. Hopefully, it will not be the one which destroys it.