"Saving Eyesight by Proxy", by Eleanor

The Organisation pour la Prévention de la Cécité  (OPC) is a French charity which sets up training and medical projects in Western Africa to prevent blindness and cure visual defects, 80% of which are avoidable. For my part I was in charge of the English language website and English Facebook & Twitter accounts.

‌I completed administrative tasks, translations, and with my boss Alain organised our World Sight Day campaign. During my time at the OPC I’ve met a real live Chevalier (the equivalent of Knight in the UK) in the OPC’s President, Professor Resnikoff, enjoyed emails with an Olympic athlete (Chloé Trespeuch, French snowboarder) and learned more about ophthalmology than I ever needed (and possibly wanted) to know. I’ve learned how to use a coffee machine, how to use MailMerge on Microsoft Word, and that nothing is more ruinous to a French lunch if you can’t get the bottle of wine open.

Working at the OPC has broadened my horizons in so many ways. I’d like to think my awareness has sky rocketed after being tasked with making contact with one of our doctors in the Central African Republic who we hadn’t heard from for several days during the troubles there. The world of international development is a complex one, and understanding the problems and barriers is key to being able to move forward from them.

Speaking of Paris itself, you can’t go wrong. At the weekends I filled my time with Christmas markets on the Champs Elysées and the obligatory trip to Disneyland in the day (when there wasn’t a protest – which is rare), and the nights were filled with lots of bars, notably a Jazz Club, the Opera Bastille and Bar Urgence – a medically themed bar which served its bizarrely named cocktails in baby bottles. The main issue is that Paris as a capital city is very expensive. Searching for accommodation is what I have dubbed “a total cauch” (cauchemar – nightmare) and going out at the weekends requires extensive research on cheap bars to make sure you don’t fall foul of some places which can charge a whole €7 for a small glass of wine.

I was extremely lucky with my work placement as I had three ‘grown-ups’ in loco parentis to help or advise with any issues I was facing, be it bank woes or where to take my visiting Grandmother for a great meal. Also having other English interns at the office meant I already had an in-road to making new friends, because the act of sticking to every new contact you make in order to expand your web of acquaintances , what my friends and I affectionately christened “the cling”, is real.

My time here has been expensive, fulfilling and fun, and altogether far too short.

First of all I didn’t find much romance except for the couples walking hand in hand by the Seine to put padlocks on Pont de l’Archevêché to cement their everlasting love. The irony is I finished my placement on 14th February, so I had given myself the target to get a French boyfriend by this day, but alas no Romeo on a motorbike appeared. 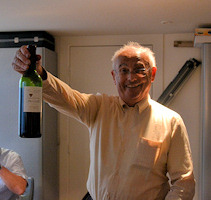 Working at the OPC has broadened my horizons in so many ways.