The University of Liverpool has been a centre for Esperanto since the movement began. In 1889 we hosted the first lecture on the language, delivered by Dr Richard J Lloyd.  Dr Lloyd went on to teach the first Esperanto course here in 1903 and by 1907 the Liverpool Esperanto Society was large enough to merit its own office. His work was carried on here by Professor William E. Collinson from 1914.

A young Scottish Doctor, Dr John Buchanan, became interested in Esperanto while working in Liverpool in the 1880s. He became a leading figure in the movement and was a member of the London Esperanto Club. In 1930, at his death, he remembered the University of Liverpool by bequeathing £4,000 to us to fund a lectureship and prizes in Esperanto. This fund continues today.

Our current Esperanto lecturer is Wim Jansen, who is professor by special appointment of linguistics and Esperanto at the University of Amsterdam. The University of Liverpool offers occasional short courses in Esperanto which are open to members of the public, including beginners in the language.

The Department recently hosted a three-day conference entitled “The John Buchanan Masterclass” in partnership with the Esperanto Association of Britain. Delegates from the UK and abroad attended sessions on language, literature and culture catering for both beginners and those familiar with the language.

Speaking about the event, Dr Chris Harris, Head of Modern Languages and Cultures at Liverpool said:

The Masterclass was an intellectual success of the first order. It has demonstrated highly effective collaboration between the University of Liverpool and the international community of Esperantists. The event has also evidenced a significant public engagement with the language and cultures of Esperantism. The Department is looking forward to hosting future events. 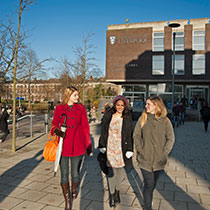