This project studies Italian culture inside and outside Italy, its mobility and its transformation through a variety of everyday practices and languages. The researchers from the TML project, who include Dr Barbara Spadaro, Modern Languages and Cultures, University of Liverpool, examined a series of representative case studies of the geographical, historical and linguistic maps of Italian mobility in Great Britain, the United States, Australia, South America, Ethiopia and Libya, and amongst first- and second-generation migrants in Italy.

In questioning the meanings of Italian citizenship and belonging, this research has both examined and produced texts, artworks, objects, photographs, videos and interviews that tell the stories of Italian cultures in a multilingual world. 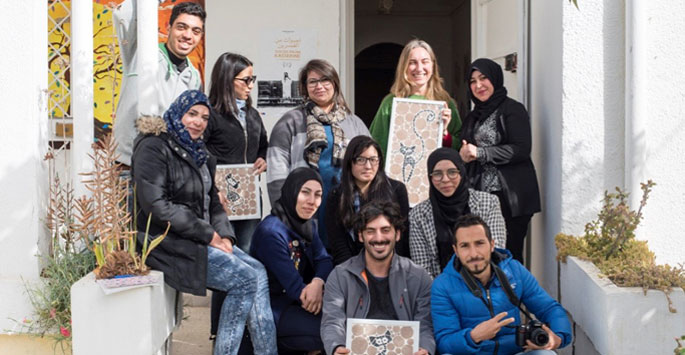 Image: Participants in a project workshop in Tunis with Barbara Spadaro

Through collaboration with the Routes Agency team, these research materials have been turned into a series of multimedia and interactive installations. The exhibition has been at the centre of a new strand of activities in Tunis coordinated by Barbara Spadaro, and in collaboration with the University of La Manouba, the Italian Cultural Institute of Tunis, the NGO COSPE Onlus and the Rayhana Women’s Association of the city of Jendouba.

This immersive exhibition offers visitors a sensorial and interactive experience and an engaging and innovative means for reflection on the transcultural dynamics of the contemporary world. Beyond Borders, Transnational Italy is also a travelling exhibition that, by returning to the research sites, has allowed the communities and associations who participated in the TML project to contextualise themselves within the wider context of the research. 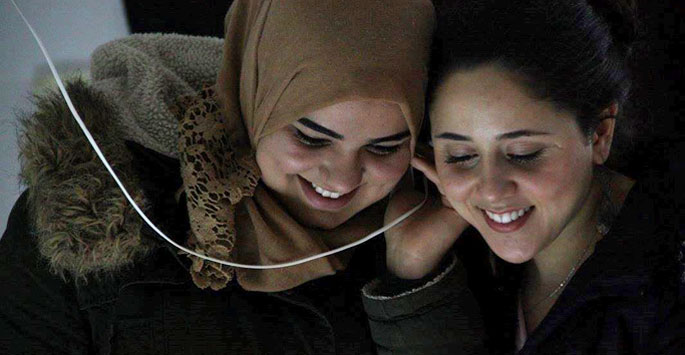 Image: Opening of the TML Exhibition at the Italian Cultural Institute of Tunis

Students of Italian at the University of La Manouba participated in a teaching module with the Beyond Borders exhibition team resulting in an interactive installation and The Rayhana Association of Women of Jendouba hosted a multilingual workshop with the photographer Mario Badagliacca (Artist in Residence of the TML project), producing the video Zoom on Dar Rayhana.

Both workshops explored processes of translation and the sharing of participants’ memories through the ‘languages’ used by the TML research project, the interactive installations of the exhibition Beyond Borders and the multimedia storytelling of Mario Badagliacca.

The workshops built on Barbara Spadaro’s work on the languages and media of Italian memory in the Mediterranean and explored collaborative practices of research and pedagogy.

The exhibition featured several examples of these research materials: memories of Italians from North Africa in both written and visual forms, interviews, photographs and artworks. The comics of Takoua Ben Mohamed, for example, expose the transformations of Italian culture in the twenty-first century.

The stories of this ‘Italian of Tunisia’ - or ‘Tunisian of Rome’ - convey a daily life of clashes and cross-cultural encounters, a sense of belonging 'beyond the borders' of languages, religions and cultures that speaks for the experience of so many of us today.

This was the first exhibition of the comics of Takoua Ben Mohamed in Tunis, in the setting of the Italian Cultural Institute, and as such represented one of the most significant achievements realized by the TML project to date. The exhibition has provided an opportunity to explore with visitors and students in Tunis how Italianness - and ideas of citizenship and cultural belonging - are transformed every day. 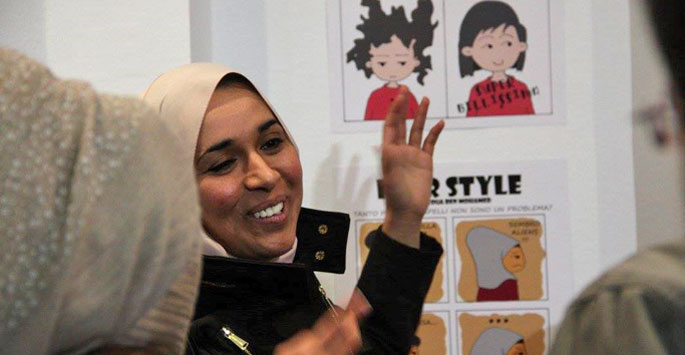 Image: Opening of the exhibition showing for the first time the comics of Takoua Ben Mohamed in Tunisia

Between 17 and 26 October 2018, the TML exhibition was displayed at the University of Liverpool. Students, colleagues and visitors have enjoyed the opportunity to engage with photographer Mario Badagliacca and the work developed in Tunisia, as well as to meet the representative of the NGO COSPE and to learn about the pilot project Zoom on Dar Rayhana, developed with the team of Radio Rayhana Jendouba.

Translating an Exhibition is a project funded by an AHRC follow-on grant linked to the TML Project awarded to Barbara Spadaro under the Translating Cultures theme.