Clare Downham delivered a talk on the Lives of St Patrick at Shenanigans Irish Bar, Liverpool, on the morning of St Patrick's day.

The project is showcased in Research Horizons: Pioneering research from the University of Cambridge, issue 23, pp.12-13. The article results from an interview with Fiona Edmonds (Dept Anglo-Saxon, Norse and Celtic) on her important contribution to understanding the cultural context in which Jocelin worked.

To learn more about the publication, please see this flyer: Jocelin of Furness: Essays from the 2011 Conference (pdf).

New Gallery opens at the Dock Museum, Barrow-in-Furness which celebrates the region's medieval heritage and displays the Furness viking silver hoard discovered in 2011. See the Dock Museum website to read more about the findings.

Fiona Edmonds delivered a talk about the project at Westholme School, Lancashire.

'The Great British Story: Furness Journey' aired on BBC One. Clare Downham was consulted by producer Sally Williams about several aspects of the medieval history of Furness for the programme.

Fiona Edmonds presented a paper at the University of Oslo, using material from her work on the project: 'Saints' cults, proprietary churches and monastic networks in the Irish Sea region'.

New discoveries at Furness unveiled in the press. Read news articles at the links below:

Spectacular ecclesiastical treasures discovered in ruins of a medieval abbey in Cumbria
(The Independent, 19 April 2012)

Extraordinary discovery of 12th century abbot's grave: 2012 technology could unmask his identity - and that of a ghost that roams the site
(MailOnline, 18 April 2012)

Fiona Edmonds gave a talk related to the project at Winstanley College in Wigan.

‌A one-day conference entitled ‘Medieval Furness: Texts and Contexts’, was held to complement the AHRC project. This took place at the Abbey House Hotel in Barrow-in–Furness.

More details of the day's schedule are at our Conference Programme for this event.

Dr Ingrid Sperber presented a paper on 'The Life of St Patrick by Jocelin of Furness' at the Department of Linguistics and Philology, Uppsala University, Sweden.

A CNWRS and CWAAS Day Conference entitled ‘Medieval Cumbria: the documentary and physical record' was held to commemorate the life and work of John Todd, former president of CWAAS.

See CWAAS website for details of their organisation and links to their newsletters.

Fiona Edmonds details the project on the ASNC blog site.

‌Publication of ‘The Saints’ Lives of Jocelin of Furness: Hagiography, Patronage and Ecclesiastical Politics’ by Helen Birkett. 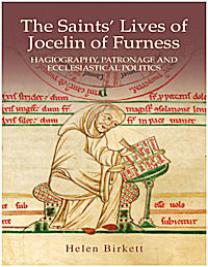 This is the first full-length study of the Lives. It combines detailed analyses of the composition of the texts with study of their patronage, audiences, and contemporary contexts; and it provides new insights into Jocelin's works and the writing of hagiography in the period. Helen Birkett is a Mellon Fellow at the Pontifical Institute of Mediaeval Studies, Toronto. Helen has kindly agreed to act as Project Adviser and spoke at our conference in July 2011.

See book details on the Boydell and Brewer website.

Professor Richard Sharpe (University of Oxford) very kindly donated the incomplete edition of Jocelin’s Life of St Patrick which was being worked on by the late Ludwig Bieler. This edition will be finished and translated by Ingrid Sperber as part of the AHRC project.

Bieler’s enormous contribution to the study of Irish hagiography and the Lives of Saint Patrick in particular is witnessed by his many publications.

See the Electronic Bibliography of Irish Linguistics and Literature 1942-71.

Clare Downham gave a short presentation about the Jocelin project at the AGM of the Cumberland and Westmorland Antiquarian and Archaeological Society (CWAAS).

See CWAAS website for details of their organisation and links to their newsletters.

This project was supported by the AHRC .