The Liverpool View: Same old same old rhetoric helps neither the nationalist or unionist cause 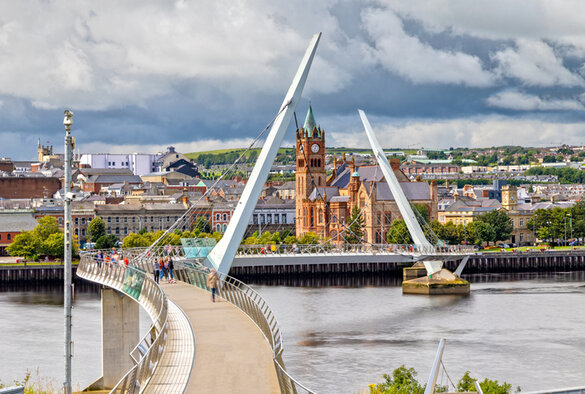 The Institute of Irish Studies/The Irish News surveys have, if it is not arrogant to state, aimed to invoke thinking around the past, the present and future.

Whether achieved or otherwise they have confirmed a certainty around greater inter-community agreement than assumed. The people, irrespective of their identity, want this place to work. At times Sinn Féin voters agree with British government policy and unionists firmly support those they vote for practising parity of esteem.

Voters respect all communities were harmed by conflict, acknowledging the need to work through complexities and wishing to embed reconciliation is the new norm. Shared opinions emerge from the mood of individuals who think freely. The same mood does not pertain within the political elite that is inured to listening.

Nearly every aspect of what is observed is the desire to drive solution-seeking. The people are even bold enough to assert that they seek a reformed assembly, with that reform, primarily led not by governments or MLAs but via citizen voice and civic expertise. They know that within their ranks lies proficiency, understanding, and capacity to affect better outcomes.

Trust in the political elite is low yet voting remains high. In reality, and on many issues, unionist and republican voters agree on much but that sameness of belief and opinion does not drive altered political practice but instead stimulates a fear that agreement deflects from the capacity of narrative control. Unsurprisingly, at no point throughout these surveys has any politician or the wearied commentators who craft division as their calling card declared the levels of agreement among the people.

Inter-community agreement is not novel. Even in the depths of a pernicious conflict shared emotions of grief were displayed majestically. An acquaintance, whose son was killed by loyalists, opened her door one morning to be met by elders of a nearby Presbyterian church. They handed her a bible in which each had signed their name under the sentence ‘not, in my name’. Or my wonderful Mass-going neighbour who is delighted that her family are like ‘Dolly Mixtures’ given the diversity within. She speaks clearly about how the ordinary people need better leadership. But she and others are far from ordinary despite being told what to think and encouraged to think negatively to maintain their passivity. So controlling are those narratives that we find low levels of confidence in factual and positive change within society.

A significant number of respondents had either no knowledge of how Northern Ireland performs against the rest of the world or significantly underestimated the contribution that it makes. Only 11 per cent estimated that in 2022 agribusiness in Northern Ireland fed 10 million people in the UK. Less than 6 per cent could accurately place Belfast as ranking 7th out of 179 regions in terms of contribution to the UK economy. Almost half believed it ranked no higher than 37th or as poorly as last. In measuring change since 1998 fewer than 10 per cent were able to accurately identify that reported sectarian crime has decreased significantly (i.e. by 60 per cent) and less than 10 per cent knew that conflict related convictions fell by 90 per cent. Despite a landscape dotted by wind farms fewer than 5 per cent knew that 40 per cent of our electricity is produced by renewable energy - at twice the EU average. Yet, in a terrain of negativity respondents were closer when estimating the levels of poverty.

A transformed society in which knowledge of that transition is unknown. So how do we plan, change, and make the right decisions over the future? What has paralysed our political system to such an extent that the light of progress is dim and unobserved? If you want a united Ireland, then these positives can persuade the southern electorate that the north is worth having. For unionists, faced by demographic change and an increasingly socially liberal electorate, the way to prevent unification is to engage with and promote these improvements. It is the process of recorded change that aids the shift into evidence based policy making not conjecture and same old same old rhetoric.

Politicians will neither describe nor account for an enhanced present as it distorts the ability to churn the past as belief. Akin to not admitting to the end of religious discrimination as it admits reform or forces admission. A political class that created a new economy and reduced sectarianism but infuriatingly deny their role in so doing. Certainty of negativity allied to the absence of hope and even more damning lack of imagination for a politics that should turn into the 21st century.

It is the freethinkers who challenge the need for assembly reform, who grind against sectarianism and who have taken risks for a new economy. Those who unlocked themselves from habit and belief as they rallied against the lingering politics of the Edwardian era in which partition was framed. Tolstoy contended freethinking ‘is not common, but it is essential for right thinking’. Political passivity around progress will at some point become exposed when more assertive understandings of the present and the future emerge. That is the direction of travel and not what we are told the ‘ordinary’ people demand or even contemplate.