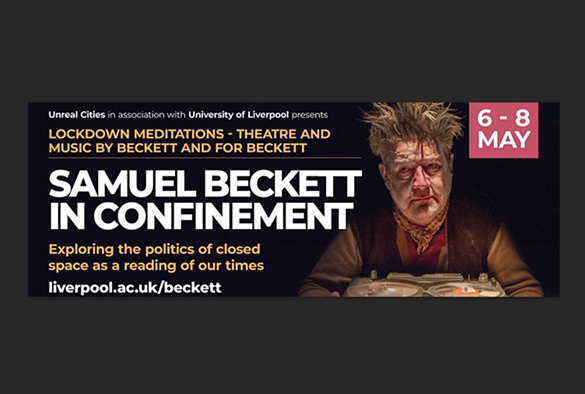 Actor and director Adrian Dunbar is bringing Samuel Beckett in Confinement – a festival celebrating the works of Samuel Beckett - to Liverpool in May, with shows staged in Toxteth Reservoir and other imaginative city locations.

The programme, curated by the Line of Duty star in tandem with renowned musician and composer Nick Roth, and in collaboration with the University's Institute of Irish Studies, presents an exciting blend of Beckett’s work, and delivers audiences multiple opportunities to experience some of his most rarely performed plays – such as Ohio Impromptu, Catastrophe and Krapp’s Last Tape.

There will also be a musical series featuring Words and Music, Beckett’s radio play collaboration with Morton Feldman; and a Ghost Trio concert, with Fidelio Trio performing Beethoven and Schubert - two of his favourite composers.

Samuel Beckett in Confinement Curator, Adrian Dunbar said: “All of us connected with Unreal Cities and the University of Liverpool’s Institute of Irish Studies are excited to bring the work of the great Irish playwright and Nobel Laureate, Samuel Beckett to the City of Liverpool.

“Beckett’s work finds us dealing with the fundamentals of human existence, what keeps us going when the world and our place in it feels absurd and empty.

“His work is of great comfort to those who have experienced the hardship and trials of life, affirming in us all as it does how precious and fleeting it may be.”

Central to the festival is a keynote talk by James Little, introduced by the University of Liverpool’s Professor of Irish Literature in English, Frank Shovlin as well as a roundtable discussion considering “Samuel Beckett’s Politics of Confinement” featuring William Davies, Emilie Morin and Hannah Simpson.

Professor Pete Shirlow, Director of the Institute of Irish Studies, said: “Many people may feel a little shy about coming to something they may see as elitist, or as something that is not for them.

“But the way in which we are presenting this - at Toxteth Reservoir and at the Black-E for example - is that we are trying to take this to the community, we are trying to break down those barriers.

Samuel Beckett in Confinement runs from May 6-8 2022, with performances and shows throughout each day and into the evening at locations across the city, including Toxteth Reservoir, The Black-E and The Tung Auditorium. To find out more, and book your tickets, please visit: https://www.liverpool.ac.uk/humanities-and-social-sciences/research/beckett/