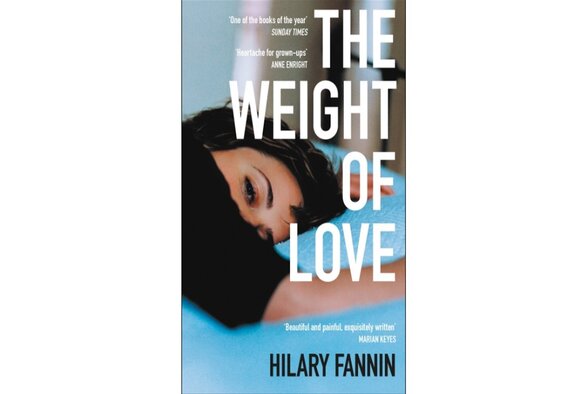 The University of Liverpool’s Institute of Irish Studies is proud to announce Hilary Fannin’s The Weight of Love (Doubleday) as the winner of the 2020 John McGahern Annual Book Prize.

The prize, which is worth £5,000, is awarded annually for the best debut novel or short story collection by an Irish writer or writer resident in Ireland published in a given year.

The 3-book shortlist comprised of: Niamh Campbell, This Happy (Weidenfeld & Nicolson); Hilary Fannin, The Weight of Love; and Cathy Sweeney, Modern Times (Stinging Fly; Weidenfeld & Nicolson). The winning entry was chosen by Colm Tóibín, Chancellor of the University of Liverpool and one of Ireland’s most esteemed writers.

In his adjudication Tóibín said: “The Weight of Love by Hilary Fannin handles a complex time frame with an effortless sense of skill and ease. Fannin's characters are drawn with texture and shade so that their motives and feelings are both unpredictable and fully credible.

"Her writing has an unfailing energy; the narrative structure of her book is compelling; her vision of contemporary Ireland is original and convincing. There are moments in the books that are deeply impressive for their daring.

"But what is most impressive is Fannin's ability to vary the tone of the book, to be at home in London as much as Dublin, to be in the 1990s as much as the world of now, to handle the characters of Robin and Joseph with the same sympathy and insight as the figure of Ruth, to create a version of love and loyalty under the pressure of time that is vivid and engaging.”

Director of the Institute of Irish Studies, Professor Peter Shirlow, spoke of the Institute’s delight at the outcome of this year’s competition and voiced continuing support for new Irish writing.

He said: “It is heartening to see that fictional debuts can come from people of all ages and do not just belong in the territory of the young. The Irish fiction scene, of which John McGahern was such an important champion and exemplar, continues to be in rude good health and we at the Institute are delighted to play our part in its continuing promotion.”

Professor Frank Shovlin said: “I would have been happy to see any of the three books win the prize, each of them representing a new, distinctive and exciting voice. Hilary Fannin is a writer with whom many will be familiar through her witty and incisive Irish Times columns.

"She brings these qualities to The Weight of Love while also managing an emotional gravitas that makes us truly care about her characters and their destinies, drawing us into an enjoyable and propulsive reading experience.”

The 2020 John McGahern Annual Book Prize was awarded for fiction published between 1 January and 11 December 2020.

The inaugural John McGahern Prize was awarded in the summer of 2020 to Adrian Duncan for his 2019 debut Loves Notes from a German Building Site (The Lilliput Press).