Emmeline Pankhurst is an iconic figure in the fight for women’s suffrage in Britain. Through her organisation, the Women’s Social and Political Union (WSPU), she campaigned for women’s rights. My research explores the connections between the Pankhurst family and Irish nationalism in Britain. In the case of Emmeline, Irish nationalism provided her with a political education which she publicised in her autobiography My Own Story.

When she was nine years old, she walked past New Bailey Prison in Salford on her way home to Seedley Cottage from a school in Manchester. There was a hole in the prison wall where people had witnessed the execution of the Manchester Martyrs - three men accused, with questionable evidence, of murdering a policeman and helping two Fenian leaders escape. The Fenian Movement claimed that the only way to achieve an Irish Republic was through force and not constitutional methods (echoes of this approach can be heard within the WSPU motto ‘Deeds Not Words’).

Emmeline describes her reaction to the incident:

‘I was transfixed with horror, and over me there swept the sudden conviction that that hanging was a mistake – worse, a crime. It was my awakening to one of the most terrible facts of life – that justice and judgement lie often a world apart.’

She was also influenced by Charles Stewart Parnell, the leader of the Irish Parliamentary Party. When her husband lost in the 1885 Rotherhithe election, she blamed Parnell’s anti-Government campaigning policy. Parnell campaigned against the party that held power in the hopes that Home Rule, the campaign for Ireland’s self-governance, would be taken seriously and passed through Parliament. Emmeline learned from this campaign and acknowledged that Parnell’s policy was admirable:

‘With his small party he could never hope to win home rule from a hostile majority, but by constant obstruction he could in time wear out the Government, and force it to surrender. That was a valuable political lesson, one that years later I was destined to put into practice.’ 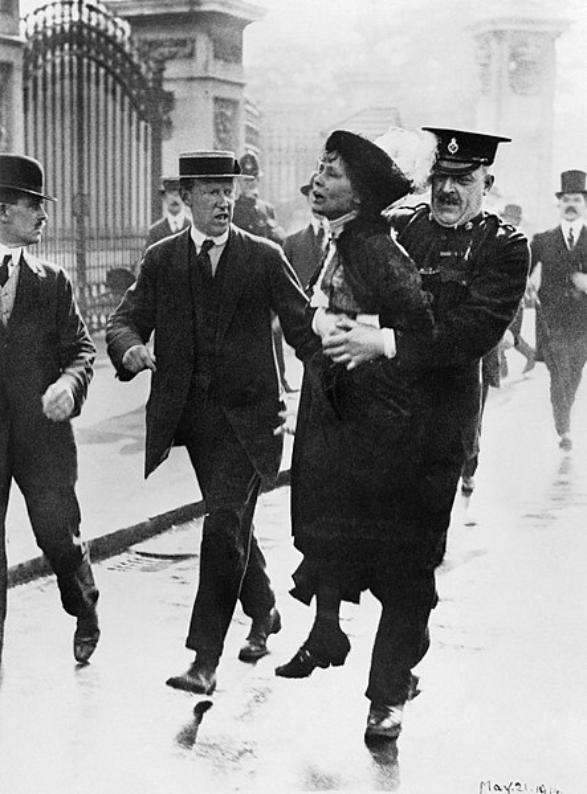 Emmeline Pankhurst being arrested by police after trying to present a petition to the King, 1914.

This was evident in the WSPU’s adoption of Parnell’s electoral policy which Emmeline attributed to Parnell publicly: ‘We did not invent this policy. It was most successfully pursued by Mr Parnell in his Home Rule struggle’.

These examples highlight the profound impact Irish nationalism had upon Emmeline’s politics. Emmeline was not dedicated to the cause of Irish nationalism and her views on the ‘Irish Question’ changed throughout her political career. However, the Irish nationalist movement provided her with a political education. It enhanced Emmeline’s awareness of an unjust political system whilst also giving her the means to challenge that system, forcing women’s suffrage to become a prominent political issue. Emmeline’s inclusion of these examples creates a narrative of a woman destined for political greatness from an early age. Her experience of inequality as a woman ensured that this greatness was realised in the form of the formidable feminist leader that she became.

Louise Coyne is a PhD student at the Institute of Irish Studies. Learn all about the department here.