A case study of Interchange activity

Enterprising Breakthrough Centre (WEB) began in the early part of the 1990's in response to local women’s needs to have somewhere to go for mutual support. WEB is located in a socially and economically deprived area of Bidston in the north end of Birkenhead.  Bidston is one of three of the most deprived wards on the Wirral. The area suffers high levels of unemployment and has the highest rate of child poverty in the country.

The centre offers a valuable service for women Wirral-wide, with its main aim being to provide education and training and to promote the good health and well being of women in the north end of Birkenhead and neighbouring districts.

WEB encourages women to use the centre for whatever meets ‘their’ needs and at a pace that suits them so that they gradually gain more confidence.

The ultimate aim is to build the women’s confidence and self-esteem and to encourage new ideas through sharing experiences and shared values.  In order to achieve this, the centre ‘promotes opportunities for developing the women’s personal skills to empower them to get more from their lives’.

With the assistance of Interchange WEB developed a research brief which would provide them with an evaluation of their services from the perspective of service users and other agencies within the locality, the results of which will help inform future strategic planning.

Interchange successfully matched the research checklist with Nicola Fowler, a final year Sociology and Criminology student from The University of Liverpool, who chose to conduct the research as her final year dissertation.

Nicola used triangulation methodology to conduct the research, incorporating both qualitative and quantitative data which enabled her to obtain in-depth and accurate information from both service users and other local agencies.

Nicola’s research highlighted a number of key issues including:

Nicola’s research concluded that ‘the general consensus is that it would be an incredibly positive thing if WEB were to continue to grow, as no other centre in the Wirral area could replace it’ (Fowler, An Applied Research Report for Women’s Enterprising Breakthrough Centre, 2005).

Outcomes of the research

Since the research was commissioned, WEB has a new Development Officer Suzanne Iuppa who has been in post since September 2005.  Suzanne commented that on taking up the new post she found the research report to be an invaluable asset in accessing information about the service users of the centre, ‘I found Nicola’s research really useful in preparing presentations on our day-to-day services for delegates in the voluntary and statutory sectors, such as for the European Anti-Poverty network meeting which was attended by 20 representatives from all member states including Eastern Europe.  I have also used the research report to develop a qualitative survey of the emotional progression of our service users’.

According to Suzanne, Nicola’s recommendations have also proved invaluable to the organisation, and a number are being acted upon.  For instance WEB is currently involved in fundraising in order that they may look at moving to larger premises.

In response to another recommendation made in the report Suzanne herself is currently involved in promoting the centre’s profile by strategically placing WEB on different networks including: Health and Social Care Partnership and the Wirral Community and Voluntary sector network.  Recently WEB has been invited to be a stakeholder representative on gender issues, helping to inform the diversity policy for the Council. 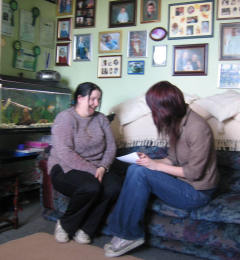 Quality is the cornerstone of everything the Women’s Enterprising Breakthrough Centre does.