Professor Lisa Shaw has used her interest, research and expertise in Brazilian culture to create a programme of activities designed to encourage emotional wellbeing in older people, especially those living with dementia.

More recently her work has focused on early-twentieth-century popular theatre in the city of Rio de Janeiro, how popular performance in Brazil’s then capital engaged in trans-Atlantic and inter-American circuits and exchanges, and how the latter inflected the performance of ‘racial’ identity on stage. She was awarded a British Academy/Leverhulme Trust Senior Research Fellowship in 2011 that enabled her to carry out the archival research for her latest monograph, Tropical Travels: Brazilian Popular Performance, Transnational Encounters and the Construction of Race (Texas UP, 2018).

Keen to find a use for her large collection of Brazilian musical comedy films from the 1950s and Hollywood movies starring Carmen Miranda, and motivated by her father’s experiences of living with dementia, Lisa has been developing a ‘Cinema, memory and wellbeing’ project over the last four years. 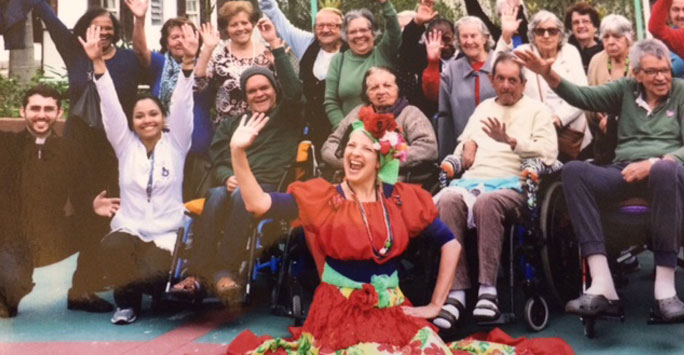 Initially funded by a University of Liverpool Knowledge Exchange Voucher, and later by ODA Research Seed Funding, as well as support from National Museums Liverpool’s HOP (Happy Older People) network, Lisa has organised interactive screenings of short film clips in care homes and community settings across Merseyside and in the state of Rio de Janeiro, Brazil.

Lisa has begun a partnership with Mersey Care NHS Foundation Trust that will take the form of a weekly film club in a specialist dementia ward in a north Liverpool hospital, as well as training volunteers at the Trust’s Life Rooms in Southport, a centre for learning, recovery, health and wellbeing. She also partnered with a residential nursing home, the Lar São João de Deus in the town of Itaipava, Rio de Janeiro, Brazil, where she conducted a 5-week research project that centred on a weekly film club.

Lisa’s work has explored how short excerpts of films, featuring music, recognisable stars and locations, and narrative sequences, can stimulate reminiscence, interaction and improved emotional wellbeing among older people, including those living with a dementia diagnosis. She has also developed best-practice toolkits in English and Portuguese so that care professionals and volunteers can learn how to run similar ‘Cinema, memory and wellbeing’ events themselves.

‘It reawakened my emotional memory of a distant past’