This set of case studies showcases CGR research, across a range of subjects, that has had an impact on society. Providing information and case studies of interest to different stakeholders, CGR is promoting and raising awareness of the benefits of research to the public. 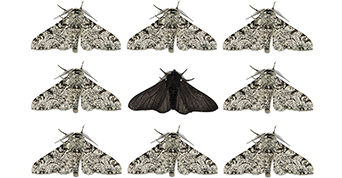 A textbook example of evolution that supported Darwin's theory and rapid adaptation is the spread of a melanic (black) mutant of the Peppered moth, following the industrial revolution, that matched the soot-darkened trees. Following the Clean Air Acts of 1956 and '68, the lighter form returned. The CGR supported a landmark study by Saccheri that found the gene responsible and examined its spread in historical samples. This work resulted in a Nature paper and widespread coverage in the press.

Fasciola hepatica causes animal disease and around USD$2bn of economic losses world-wide to the livestock industry. It is also a zoonotic pathogen and a poses a significant health burden in developing countries. The economic and health problems associated with liver fluke are exacerbated by the emergence of drug resistance within the parasite populations and the lack of alternative drugs with which to treat the disease. Working closely with colleagues in veterinary parasitology at the University of Liverpool, the CGR produced the first genome sequence of this important pathogen. The genome was remarkably large for a parasite, more than a billion DNA bases long, and exhibited substantial diversity within populations. Current research is exploiting genomic methods to find the genetic basis of drug resistance and to try to find new drug or vaccine targets to safegaurd livestock production.

This collaborative R&D project aimed at the development of experimental and bioinformatic pipelines to accelerate the commercial application of metagenomic approaches. The project developed robust, simple procedures and processes for determining and understanding the structure and functional capacity of microbial communities. The developed tools will have wide applicability across many industry sectors and will radically alter approaches to microbial control, and facilitate the discovery of more efficacious, targeted and environmentally friendly biocides.

The project aims to improve the health of people living in some of the poorest countries in the world that carry a disproportionate burden of infectious diseases. Human African Trypanosomiasis (HAT) is caused by a single-celled parasite whilst schistosomiasis is caused by a parasitic worm. They are two of the most important of the neglected tropical diseases. Both diseases are targeted for elimination by the WHO but the current control strategies are inhibited by failure to target and treat some of the people that maintain the reservoir of infection. The aim of this project is to apply the latest advances in scientific research to identify these people and understand their response to infection, and in the process train the next generation of African scientists in these advances.

The approach focuses on exploiting the fact that some people are naturally able to control or even eliminate the parasites that cause the disease whilst others cannot. By comparing the genes in resistant and susceptible people we will identify genes and molecular pathways that are crucial in controlling the disease. These data will inform better targeted strategies for the control of disease transmission.

To date, we have enrolled more than 3000 participants from 7 African countries in the arm of the study that focuses on HAT (** Ilboudo, Hamidou, Harry Noyes, Julius Mulindwa, Magambo Phillip Kimuda, Mathurin Koffi, Justin Windingoudi Kaboré, Bernadin Ahouty et al. Introducing the TrypanoGEN biobank: A valuable resource for the elimination of human African trypanosomiasis. PLoS Neglected Tropical Diseases 11, no. 6 (2017): e0005438. ). Three hundred of these samples were whole genome sequenced in order to identify population-specific SNPs and the data contributed substantially to the design of a custom Illumina SNP chip that encompasses the diversity across African populations. The data also provided an insight into African genome evolution and population structure (Mulindwa et al, in prep; Nyangiri et al, in prep). We have also used this resource to investigate the association of sixteen candidate genes with disease phenotypes. The candidate gene approach identified variants that associated with disease in APOL1, HLA-G and HPR. We have recently received the genotyping data for over 2000 samples and are currently carrying out the genome-wide association study to investigate the susceptibility phenotype on a genome-wide scale.

Diarrhoeal disease, affecting 1 in 4 people in the UK annually is the most common cause of infectious disease outbreaks in community and healthcare settings. Outbreaks such as norovirus are one of the costliest infections to the NHS. Surveillance is the key to detection however outbreaks are increasingly tricky to detect using traditional methods. Current microbiological methods only identify the cause of infection in about half of cases and it can be several days until results are available.

The aim of this study is to modernise the approach to surveillance and clinical diagnosis by incorporating cutting edge research techniques. The project seeks to address whether high-throughput sequencing offers a more sensitive method of characterisation of known pathogens and to identify new and emerging pathogens.

The Integrate project is a collaborative programme of research taking place in the UK, led by Prof. Sarah O’Brien at the University of Liverpool. This research is funded by the Department of Health and the Wellcome Trust through the Health Innovation Challenge Fund.