Effects of pollution 'passed down' through generations in water fleas 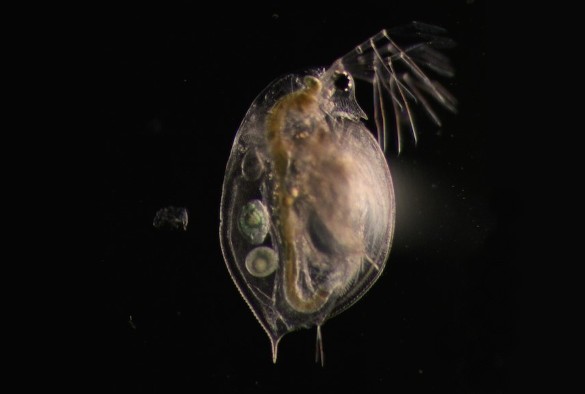 A new study led by University of Liverpool researchers has shown that the effects of pollutants can be transmitted over many generations in water fleas and may persist long enough to influence the evolutionary process.

Published in Evolution Letters, the research adds new evidence to the debate on whether environmental influences can cause heritable changes to an animal’s biology.

Genes passed down from parents to offspring are overlaid by a complex array of proteins and chemicals that determine how they are expressed – collectively known as the ‘epigenome’.

The epigenome is sensitive to environmental stresses, such as pollution, which can alter gene expression. Importantly, there is increasing evidence that these stress-induced changes can be transmitted across generations.

Dr Stewart Plaistow, a Senior lecturer in Evolutionary Biology at the University of Liverpool, explains: “Epigenetic inheritance mechanisms are controversial in evolutionary biology at the moment because they provide a possible mechanism for the inheritance of environmental effects alongside traditional Darwinian inheritance.

“Although they are routinely demonstrated in plants they are much more controversial in animals because epigenetic marks are often thought to be wiped clean during embryo development.”

In this study, the researchers looked at one important epigenetic mark, the methylation of cytosine in DNA, in the water flea Daphnia pulex.

They demonstrated that exposure of water fleas to low doses of pollutants had effects on the epigenome that persisted for 15+ generations.

They exposed replicated populations of water fleas to three different freshwater pollutants for 7 months (approximately 15 generations), and then switched half of the populations to clean water for 8 months (>15 generations).

They found that all three pollutants led to changes to DNA methylation. Importantly, some of these changes were detectable not only in the continually treated Daphnia, but also those that had been switched back to clean water, implying that these persistent modifications were stably passed down through the generations, even in the absence of the pollutant.

Dr Ewan Harney, a Marie-Curie fellow at The Institute of Evolutionary Biology, Barcelona, said: “If these environmentally-induced persistent changes to the epigenome are able to influence organismal traits like growth and development, as appears to be the case, epigenetic processes like DNA methylation may play an important role in rapid adaptation.”

Work in the lab is underway to test whether these effects are independent of genetic background and whether they influence fitness.

The work was funded by the Natural Environment Research Council and supported by the University’s Centre for Genomic Research.